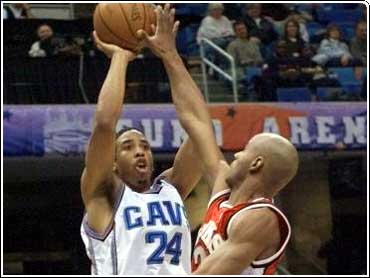 Brad Daugherty didn't come to his own party. Shawn Kemp and Cavs coach Randy Wittman got thrown out, and everyone is wondering who invited the three guys with the whistles.

Isaiah Rider scored 23 points as the Atlanta Hawks held off Cleveland 102-94 on Saturday night in a game the Cavaliers started with nine players and finished without Kemp or Wittman..

Dikembe Mutombo had 17 rebounds, including a big one with 41 seconds left, and Alan Henderson and Bimbo Coles had 16 points apiece for the Hawks. Jim Jackson added 15 for Atlanta.

The Cavs honored Daugherty, the team's career leader in scoring and rebounding, at halftime. Because of a prior commitment, the former All-Star center didn't make it to Cleveland.

He missed seeing one of the season's wildest games arguably.

Besides the two ejections, there were six technicals called, two more for illegal defense and one flagrant foul.

"We had officials arguing with officials," said Wittman, tossed in the third quarter 21 seconds after Kemp was thrown out.

Wittman didn't hide his displeasure with the officiating.

"I thought play was out of control right from the beginning of the game," he said. "I didn't see any direction out there. That's just my opinion."

Hawks coach Lenny Wilkens was about the only guy with a reason to celebrate. The victory was No. 300 with Atlanta for the NBA's career leader in coaching victories (1,169). He sympathized with Wittman.

"It's frustrating," he said. "Hey, the last time we came here, I got thrown out. It was pretty inconsistent."

"I had to take it upon myself to be aggressive," said Miller, who played all but the final 12 seconds. "I didn't get exhausted until late. That's when I made a couple of mistakes because I was tired."

Kemp, leading the league in personal fouls, was ejected for the second time in a week in the third following a heated exchange with referee Leroy Richardson.

With the Cavs trailing 58-53, Lamond Murray missed a driving dunk and Kemp grabbed the loose ball underneath. He appeared to be fouled by Mutombo as he tried to go up, and in frustration threw the Hawks center to the floor.

Richardson called a foul on Kemp, who charged toward the official and was immediately tossed. Kemp didn't go quietly, screaming in Richardson's ear before being escorted to the locker room.

Wittman was gone soon after, leaving assistant Bill Blair to coach the team the rest of the night.

"I thought Shawn got fouled on the second one," Wittman said, "and there was no call. ... I have officials coming up to me saying, `I probably should have called that.' But I'm tired of that."

Coles, who scored 14 points in the second half after shooting just 1-for-6 from the floor in the first half, hit a jumper with 7:12 remaining to put the Hawks up 88-77.

"I was just staying confident in my shot," Coles said. "The guys on the team told me to stick with it."

Miller, whose triple-double was Cleveland's first in five years, and Ferry brought the Cavs within 94-90 with 1:49 remaining.

Cleveland needed a defensive stop, but Ferry was called for a flagrant foul with 1:27 left on Mutombo, who made both free throws and Atlanta kept possession of the ball.

"That was not a flagrant foul," Ferry said. "I had the ball. Sure, I tried to foul him, but not flagrant. The ref and I talked and we agreed to disagree."

Miller's two free throws brought the Cavs within four at 96-92, and Cleveland could have gotten closer if not for Mutombo, who grabbed a long rebound off a miss by Coles.