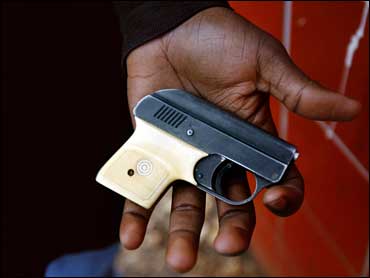 On Sept. 24, 1976, one of the toughest gun laws in the nation took effect in the District of Columbia, essentially outlawing the private ownership of new handguns in a city struggling with violence.

Over the next few weeks, a man with a .32-caliber pistol held up workers at a downtown federal office at midday, a cab driver was shot in the head, and a senator was mugged by three youths, one carrying a revolver, near the U.S. Capitol.

Since the ban was passed, more than 8,400 people have been murdered in the district, many killed by handguns. Nearly 80 percent of the 181 murders in 2007 were committed with guns.

On Tuesday, the Supreme Court is scheduled to hear arguments in a challenge to the city's handgun ban. The case is likely to produce the most important firearms ruling in generations and could undermine other gun control laws nationwide if the court takes an expansive view of the right to bear arms.

The central question is whether the Second Amendment guarantees the right of individuals to bear arms, or instead protects the collective right of states to maintain militias. The court probably won't base its ruling on the effectiveness of Washington's law.

Outside the court, however, a long-debated question is whether a strict gun law like Washington's has any effect on violent crime.

City leaders say the law has kept many guns off the street and warn that violence could increase without it. Firearms still flow in from states like Maryland and Virginia, but District of Columbia officials say the ban reduces the number of legally owned firearms that are stolen or used in domestic killings and suicides.

"Whatever right the Second Amendment guarantees, it does not require the district to stand by while its citizens die," the city wrote in its petition to the Supreme Court last year.

To gun rights advocates, the numbers prove a different point: Violence continues unchecked despite the ban. And while criminals seem to be able to get guns with ease, law-abiding people are being denied the means to protect themselves, they say.

"I should be able to live in the district and protect myself," said Shelly Parker, who said she was harassed and threatened in her former Capitol Hill home by a drug dealer who once tried to break down her door. Parker was a plaintiff in the original case against the city.

Those who live daily with gun violence on Washington's streets, many of them just teens, paint a stark picture of how easy it is to get a firearm. A gun can be bought with a few well-placed calls and a couple hundred dollars.

"Some people look at a gun as part of their outfit," said Maurice Benton, a 19-year-old who says he has never had a gun but was shot in the abdomen by members of a gang while leaving a party in 2006. "They can't go anywhere without it."

The city's gun ban emerged from exasperation. Still reeling from the riots of 1968, the city saw violent crime rise and residents flee to the suburbs. In 1974, two years before the ban took effect, more than half of all homicides were committed with handguns.

There were an estimated 22,000 registered gun owners in the city in 1976, but a Georgetown University poll found three out of four city residents supported the bill. The law cleared the D.C. Council in a 12-1 vote and went on to survive both a court challenge by the National Rifle Association and efforts in Congress to scuttle it.

"Handgun crimes were just getting out of sight," said Sterling Tucker, D.C. Council chairman when the ban was enacted. "We had to isolate and contain the problem. We thought a handgun law would do that."

The law bars private ownership of handguns, with exceptions for law enforcement officers and those who had registered handguns before the ban took effect. Shotguns and rifles are legal, but must be disassembled or stored with trigger locks.

Homicides in the district did ebb over the next few years, largely following a national trend. In 1977, the U.S. Conference of Mayors reported robberies, assaults and homicides using handguns had fallen sharply in D.C. and concluded the ban was working. However, the results were challenged even by the city's police department, which said police tactics had contributed to the drop.

In the late 1980s and early 1990s, murders spiked as Washington, like many other cities, was hit by the crack epidemic. By 1991, the number of homicides reached 479, or 81 deaths per 100,000 people, earning the city status as the nation's murder capital.

Yet that year, a study released by University of Maryland criminologists in the New England Journal of Medicine suggested the gun ban had saved lives in the decade before. They argued the ban had prevented 47 deaths per year in D.C., both suicides and murders. Surrounding areas in Maryland and Virginia had not seen a corresponding drop in gun crime.

The study analyzed data only through 1987, and did not incorporate the higher murder rate during the crack surge, an epidemic critics said revealed the law's weakness. Other criminologists said the study should have compared the district to Baltimore, a city with similar crime problems where violence also declined during the same period. The authors went back and compared the district to other cities, including Baltimore, saying their conclusions still held up.

In the late 1990s, the annual homicide numbers began to fall as the crack scourge ebbed. In the past decade, many of the city's neighborhoods also have undergone a revitalization, attracting more affluent residents. Last year, there were 181 murders.

But the city's location remains a problem for the law. Washington is surrounded by Virginia and Maryland, where guns remain legal, and many firearms can be traced to shops just across the line. The number of guns seized by police has surged in recent years, reaching 2,924 in 2007, nearly 1,000 more than in 2003. Most of the guns were used in crimes.

Sterling Tucker said city officials realized the law had its limits, that guns would never vanish from the streets. And they never imagined it would do away with homicides and violent crime altogether. He believes it has at least provided some check on violence, taken away a tool for some criminals.

"We knew there were problems we couldn't wipe out," he said. "But we had a little more control over it."