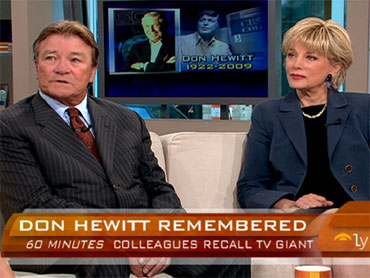 When The Early Show co-anchor Harry Smith was going to college in Iowa, the Vietnam War was a big issue among students.

One day he'd be holding a candle at a protest demonstration and the next day he'd be in serious conversation with the recruiter for the Marine Corps. Yes, politics reached all the way out to the prairies of Iowa.

Whenever he visits Central College in Pella, these and other memories come flooding back. Pointing at what had been the freshman men's dorm, he says it is now co-ed now and two-thirds of its residents are women.

Looking at old pictures, Smith notes he came to this campus to play football; he was number 54. But, he also ended up in a few plays.

Pintor says, "If we took something from each to make one person, we would have the perfect candidate."

With only a few hours left to decide, she says, "I'll be OK. In a couple hours, I think I'll decide."

That's the joy of the caucus system, she says. You don't just go in there and vote; you get to discuss it with the other Democrats in your county. You can hear the other groups' point of view.

Anna Haustein says the war is a predominant issue among students. "Especially, I know several students, some of them have been friends of mine, who have actually gotten called up. And I think that that really kind of brings the issue home to us."

Steve Cooper notes, "If Bill Clinton could have served a third term, we wouldn't be in Iraq now. We would still have inspectors there, assuring the people of world that Iraq didn't have a weapons of mass destruction program and that they weren't really a threat to the United States."

The students say they feel deceived by the Bush administration.

Amy Adams explains, "We don't get a coalition; we go there by ourselves and then there's been shown no known link to al Qaeda and no found weapons of mass destruction."

And these are things students actually talk about. Amy Adams says, "I think that often our demographic gets labeled as the one that isn't active, but I think you could look at any age group and say that they aren't researching the issues. Or doing what they need to do to be a responsible citizen, by going to vote, by going to caucus on Monday night."

In Iowa, the candidates come to the people. While Smith chatted with the students, Dick Gephart was campaigning two blocks away. And Teresa Heinz Kerry stopped by the student union to stump for her husband. Howard Dean was on campus just last week.

In the end, Anna Haustein says, she will support whoever the eventual Democratic nominee is. "I think that anyone we elect is going to be better than Bush," she says.

Amy Adams agrees, "Our country needs to head in a different direction."

Andy Doane says, "Not only will I support whoever candidate gets the nomination but I think the nation will support a candidate besides Bush and I think that we can win this election."

Esperanza Pintor adds, "We need a new person in that office."

Most of the students at Central these days are Republicans. The students Smith spoke with, the ones who will go to caucus, are in the distinct minority.