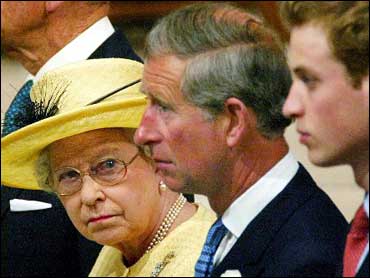 Prince William was on the front pages of the newspapers in Britain this week because he affectionately kissed his grandmother, the queen, in front of everyone. Then Prince Charles did the same.

Is this royal family at last unbending in public and getting it right?

CBS News Correspondent Richard Roth reports it may be, but there are those still critical of the royals' behavior of late.

At Ascot Racecourse, where the hats are as well-known as the horses, the season is famous for handicapping the British royals. And social commentator Victoria Mather finds high exposure tends to leave those thoroughbreds over-exposed.

"The queen is completely and utterly wonderful -- she is a national treasure," says Mather. "But the rest of them are just absolutely rubbish."

Among the most dependable rituals of the Windsor monarchy is the tradition that publicity comes with a price.

For Prince Charles, the dilemma between love and duty has been revived because the former Archbishop of Canterbury has just said the prince and Camilla Parker Bowles ought to go ahead and marry.

The latest odds from British bookmakers now put the chances of a royal wedding this year at eight to one - pretty high, even if it is hardly authoritative. Some other numbers in England, though, are dismal.

A new poll from The Times of London found the British almost evenly divided over whether Prince Charles and Bowles should wed. But it also finds more than a third of the country just doesn't care.

"The significance of 'I don't care' is that once people start ceasing to care or having any interest in the monarchy, it's on the way out," says Mather.

Royal romance wasn't always a bore. And the fact is, the legacy of Princess Diana still provides the best plot lines in the royal soap opera.

When Princess Diana's mother recently died, and Prince Charles was invited to stay away from his former wife's family funeral, the distance did him little good.

Mather notes, "I think that what was absolutely staggering about the funeral of Frances Shand Kidd, the mother of the Princess of Wales, was not so much that the prince was excluded, but that he chose that particular night to go to the theater -- to 'Mamma Mia,' for heaven's sake."

Nor have his sons escaped the seasonal sniping. Prince Harry hoping to enter military school next year. And, Prince William is musing about a career in the army.

William says, "I haven't really ruled anything out, but a career in the armed forces would be the best thing at the moment, because it would be lovely to recognize all the hard work that the armed forces are doing."

It was odd, then, that neither Prince Harry or Prince William showed up to honor the heroes of D-Day.

"These two spoiled young men couldn't be bothered to get off their bottoms from their holidays and go and honor these people who fought for their grandfather and fought for their country -- it's despicable," says Mather.

That's just sharpening the claws for what could be a royal watcher's feast: next month's dedication of the Princess Diana Memorial Fountain. It'll be the first time since Diana's funeral that the Spencer family shares a public stage with the Windsors. It will be an historic opportunity for an emotional royal reconciliation -- or not.

The queen is expected to make an emotive speech about Diana in the dedication ceremony.