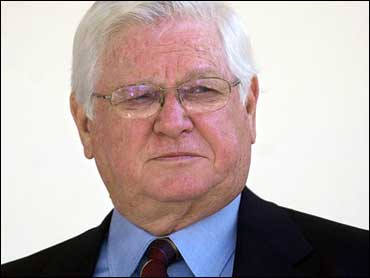 This column was written by the editors.

Harold Rogers, the smooth-talking Republican congressman from Kentucky, has emerged in recent weeks as an exemplary figure of congressional disgrace. Private companies have courted his favor with political donations, golf excursions, and exotic vacations — and he, in turn, has channeled millions of taxpayer dollars in their direction. From his powerful position as chairman of the Homeland Security appropriations subcommittee, he has plied constituents and corporations alike with funds from the national treasury. It is the work of the likes of Hal Rogers that has driven Congress' approval rating to 22 percent — and if more people knew of him, that number would only sink lower.

As the man in charge of Congress's homeland-security budget, Rogers's abuse of federal funds is not just a financial scandal — it is a matter of national security. Instead of directing his budget with the sole aim of providing for the public defense, he has turned the power of his position to his benefit — and, by extension, to the benefit of the companies who finance him and the local constituents who keep him in office.

As The New York Times recently recounted, lawmakers decided in 2002 to implement a standardized, tamper-proof, biometric ID card that would be issued to transportation workers nationwide. Rogers took this as an opportunity, inserting language into appropriations bills requiring that the new ID card rely on old technology that was produced at a plant in his district. Frustrated Homeland Security officials had to endure a lengthy delay and pay $4 million for a comparison study to show that the technology they preferred was superior to the one required by Rogers.

As the new ID card was developed and tested, Rogers kept up his meddling. He required that the new-technology production sites be relocated in Kentucky, and he helped award millions of dollars in contracts to various Kentucky companies that had together donated around $100,000 to his political campaigns. One of these companies employed Rogers' son as a computer-systems administrator.

When Homeland Security officials decided that transportation workers would have to undergo background checks before being issued their new ID cards, Rogers again sprang into action. He stuck an earmark into an appropriations bill, mandating that a no-bid contract be given to the American Association of Airport Executives (AAAE) to handle the background-check operation at a price of tens of millions of dollars.

The Times reports that since 2000, the AAAE has paid for trips for Rogers and his wife totaling more than $75,000, "including six visits to Hawaii, four to California, and one to Ireland." In addition, the group has donated around $18,000 to Rogers' political campaigns in the last four years, and, in 2002, it honored him with its Congressional Leadership Award.

Rogers and his staff maintain that the earmark for the AAAE was motivated purely by considerations of speed and convenience. But since when have those things mattered to Rogers? His interference in this matter has only delayed the implementation of the new ID cards.

A public outcry has caused the AAAE's no-bid deal to be rescinded. Various companies will now have a chance to bid on the contract, which we hope will be awarded on the basis of merit.

But Rogers' disgrace cannot be rescinded, and it stands as a reminder of the need for congressional earmark reform. The House leadership deserves credit for already pushing one such reform, but there is still a long way to go. The power of lawmakers to direct public funds to private recipients with little oversight is a great facilitator of corruption. If anyone wonders why many conservatives recoil in disgust from the current Congress, look no further than Chairman Rogers.