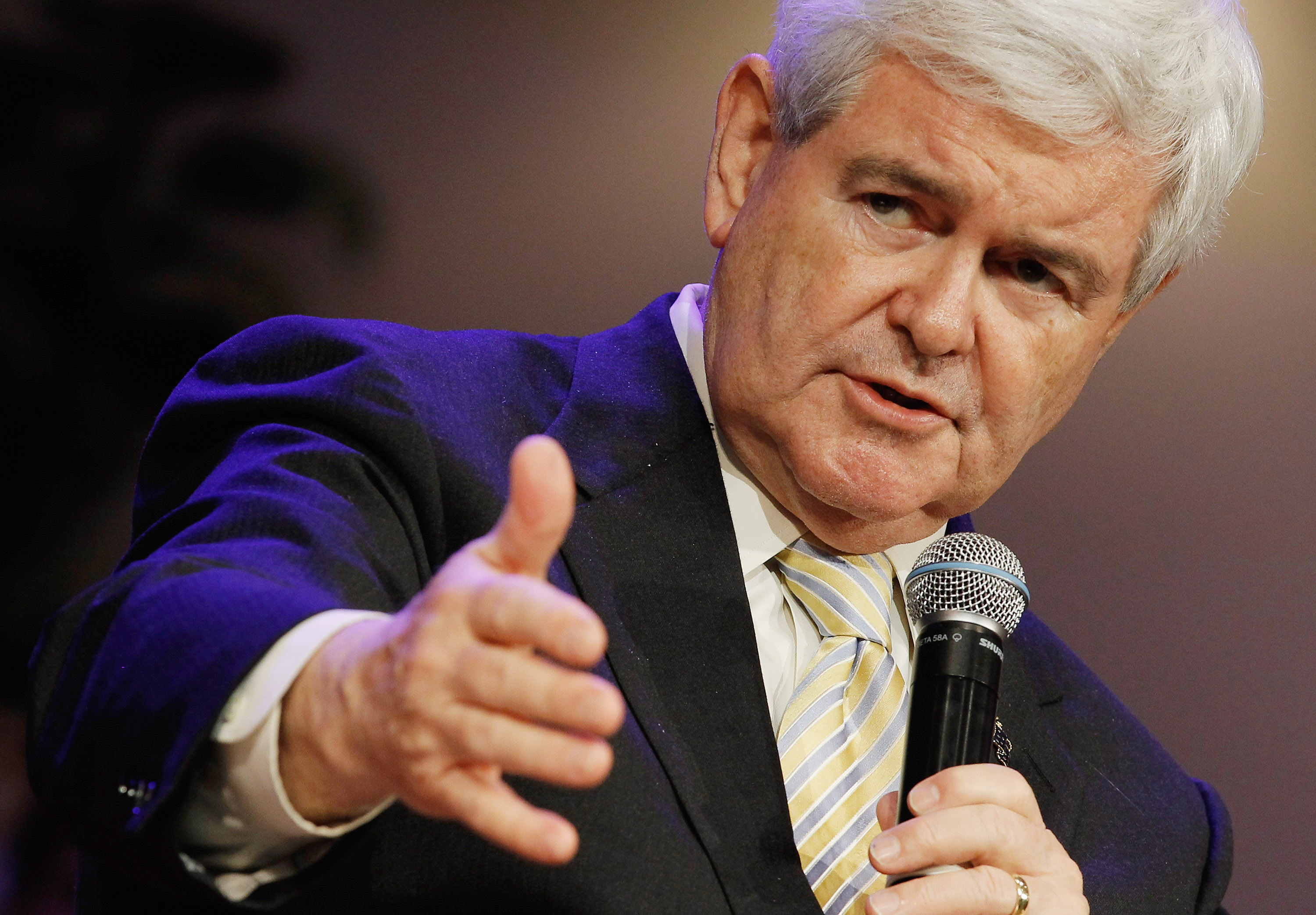 A few days ago, after the last presidential debate in South Carolina, I was gauging the reaction of some Real People, as opposed to the Fake People who populate my seedy little racket. I don't talk to Real People often if I can help it, as they tend to confuse the emerging media narrative with their common sense, consistency, and almost touching naivete.

The Real Person in question was a little puzzled about the outcome of the primary. She wanted to know, "Did I miss something? How did Newt appeal to South Carolina conservatives right after the 'open marriage' accusation by his ex-wife? Is adultery now an asset for Republican candidates?" What could I do but look at the little lamb with pity?

But here's what I was thinking: O you poor, gullible values voter! I remember your kind. You probably still have your laminated Moral Majority card from the mid '80s--as dated now as your Members Only jacket, your Belinda Carlisle records, and your Care Bear collection. Those were more innocent days. A time back when lefties used to mock conservatives for voting their conscience. Back when conservatives had something as unfashionable as a conscience, currently regarded as the stirrup pants of character traits.

But South Carolinians have sent a message: Those days are over. How does anyone expect us to be cross with Newt Gingrich for dumping his multiple sclerosis-stricken wife over the phone, in order to take up with someone so genuine and warm as Callista Gingrich? Especially when, according to Newt's own ex, he was generous enough to offer to share himself with both women? And people say Republicans are selfish!

No, South Carolinians made themselves clear: The real crime here wasn't the so-called crime, which just so happened to be all over the headlines on debate day, a story further dragged out by Newt's daughters, whom he pushed forward to issue a nondenunciatory denunciation of Marianne Gingrich. No, the real crime was the lamestream media, in the person of CNN moderator John King, who had the unmitigated gall to ask about the news of the day as though he were some kind of journalist or something. Right there in the middle of a debate! Didn't he realize that a question like that would draw attention away from the platitudes, empty promises, and self-comparisons to Ronald Reagan that the candidates are constitutionally obligated to make, that primary audiences applaud like trained seals, and that have helped make our country great? Or at least mediocre, which passes for great these days. (Do you think they compare themselves to Ronald Reagan in Greece? I doubt it.)

Sure, South Carolinians could've voted for the goody-goody Mormon, whose idea of licentiousness is undoing a button on his magic underwear top. Or maybe for that sweater-vested moral crusader, the one who is always prattling on about the sanctity of family (as if Newt doesn't love families--he's had three of them already). Or South Carolina could've gone all retro, playing to bible-belt type by sticking with the candidate who is technically the only evangelical left in the race--the chaste dullard Ron Paul, who has been married to the same woman since 1957 (yawn). It's like Ronald Reagan said, "You can tell a lot about a fellow's character by his way of eating jelly beans." (What that quote has to do with anything, I've no idea. I just thought I'd work in a gratuitous Reagan reference like Newt does about every five minutes, the thinking being that if you mention Reagan often enough, people might forget that you bear little or no resemblance to him.)

If you've noticed, as South Carolinians did, morality doesn't matter. Character doesn't count. "You must not give power to a man unless, above everything else, he has character. Character is the most important qualification the president of the United States can have." Guess who said that. James Madison? Abe Lincoln? Teddy Roosevelt? None of the above. It was Richard Milhous Nixon. Whose lack of character was rivaled only by his lack of self-awareness.

Instead, South Carolinians took a good hard look at the only issue in this race that really matters--sticking it to the lamestream media, loudly and often. Which Newt does nearly as frequently as citing Ronald Reagan, since he likes his applause the way he likes his redemption--cheap and easy. South Carolinians also took a gander at history/their Democratic competition. And anyone who studies history can appreciate that every skirt-chasing cad of the Democratic presidential persuasion in the last 50 years, i.e., JFK and Bill Clinton, proved either exciting or competent, presiding over Camelot and unprecedented prosperity, respectively. Whereas seemingly virtuous one-woman men, i.e., Jimmy Carter and Barack Obama, have presided over some of the greatest calamities in modern history, namely, the Jimmy Carter and Barack Obama administrations.

This must not be lost on Newt Gingrich, who is not only a student but a professor of history (why else would Freddie Mac pay him $1.6 million?). So Newt rolled the dice, pushed back hard, and won big. Demonstrating in the process a new Republican paradigm. I call it the Jim Thompson Strategy, named after the great writer of noir pulp fiction, who laid it plain in his 1954 book, The Nothing Man:

I may be wrong--I have been wrong about so many things--but I can't recall ever hearing or knowing of a son-of-a-bitch who did not do all right for himself. I'm talking about real sons-of-bitches, understand. The Grade-A, double-distilled, steam-heated variety. You take a man like that, a son-of-a-bitch who doesn't fight it--who knows what he is and gives his all to it--and you've really got something. Rather, he's got something. He's got all the things that are held out to you as a reward for being a non-son-of-a-bitch.

Remind you of anyone? As Newt correctly calculated, it turns out that the reprise of the adultery story was a break for him. The excitement caused by his reaction to it might even have won him the primary. Now he just needs a few more similar breaks. With a little luck and a lot of hard work on Newt's part, Callista might come down with a debilitating disease. He can then break up with her, via Twitter, while simultaneously announcing that he's taken up with a Hooters waitress, preferably from a swing state like Ohio. He'd better get cracking, though. The election is only nine months away. By the time some lamestream media moderator like John King pops the question again in a debate against Obama, Newt will want to be able to castigate him for bringing up ancient history. As a professor of history, Newt knows that those who ignore their past get to keep repeating it as often as they'd like.

Bio: Matt Labash is a senior writer at The Weekly Standard. The opinions expressed in this commentary are solely those of the author.