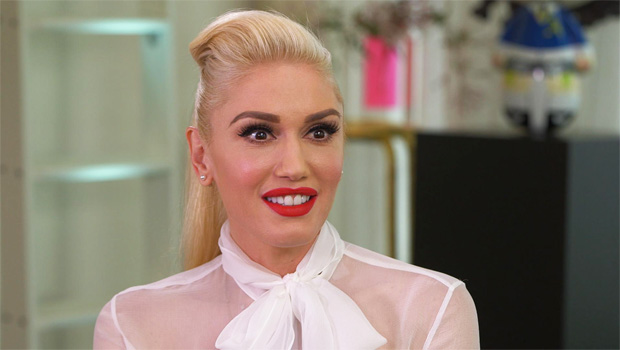 GWEN STEFANI had a very big hit with "Hollaback Girl" back in 2005. Yet, along with the hits, there has been one very big and public miss ... a real blow to her personal life. She talks about that and more with our Lee Cowan ... For The Record:

Gwen Stefani is, underneath it all, a superstar who doesn't brag. Her collection of awards -- including her Grammys -- are tucked away in a closet in her Beverly Hills home.

"I thought I had more than that?" he expressed to Cowan, showing off three Grammys.

After two decades on the charts, Stefani has had the time and the talent to rack up all kinds of recognition. But last year's Grammys were bittersweet. It was the last night the pop star would be truly happy for a long, long while.

Stefani's high-wattage marriage to Gavin Rossdale, the lead singer of the band Bush, exploded after 13 years.

"At that time everything was like I had no skin, it was so raw," Stefani tells Cowan. "Nobody knew what was happening, and I had this big secret."

And the 46-year-old rocker, fashion icon and mother of three young boys suddenly found herself at a crossroads.

"I was down all the way; you don't go down lower than that. It was rock bottom. I was so embarrassed, you know what I mean? I was like, 'Wow, I have to turn this into something, like, I can't go down like this. If I can do music, then everything will be okay.'"

But music hadn't come easily for Stefani of late. A long, frustrating bout of writer's block, she says, had left her musical confidence shaken.

When she walked back into the studio for the first time, "I said, 'Listen, I don't care about the charts, the hits, the style of music. I just want to tell the truth and I just have to get this out of me, whatever it is, and I want to write and I want it to be coming from me.'"

Her misery turned out to be her muse. Within a matter of weeks, she had written more lyrics than she knew what to do with.

"It was just the idea of sitting at a piano and doing it and letting my feelings come out, and it felt so good," Stefani said. "It was like, 'Wow, this is all I need to be doing right now; nothing else feels good but this.'"

"It's like the flood gates just opened?" Cowan asked.

"It was just like the confidence came to me, and it just felt like the right thing to be doing. It was proactive as opposed to, like, just getting deeper into a hole."

She was on a roll. But then came a surprise call from her record company. Stefani was told her new record was "just too personal, too artistic, and they didn't think people would relate to it. And it really deflated me. I was like, 'Wow, you guys, you don't even understand what you're doing to me right now. This was saving my life, and now you just punched me in the face, like, for saving my own life?' That's how it felt."

She bounced back by returning the studio the next day with a mission: "Let's write the most noncommercial, personal record ever."

That very day she wrote the haunting ballad, "Used to Love You."

She sent a demo over her record label, and her phone rang once again. "It was the first time in my entire career that somebody from a record company called me to say that they thought I had a hit," she said. "It was pretty magical."

"Used to Love You" became Stefani's first single off her first solo album in a decade, fittingly called, "This Is What The Truth Feels Like."

It is raw, almost a confessional.

It's not the first time Stefani has turned to songwriting for therapy. Another painful break up -- this one back in 1994 from No Doubt's bassist Tony Kanal -- lead Stefani to write "Don't Speak."

It was a monster hit that put her and No Doubt on the musical map for good.

"I never could understand why I was so unlucky in love," Stefani said. "I have so much love in me, and yet I've just had so much tragedy with that. But yet, I've had so many incredible blessings -- how did this happen to me? It's crazy!"

One of those blessings, she says, was her stint as a coach on NBC's "The Voice" last year. She sat two chairs away from country singer Blake Shelton.

He, too, had undergone a very public split with his wife, Miranda Lambert, a country star in her own right.

"In all of this craziness that happened, like unexpected horrible-ness, I found a friend that was going through literally the exact same thing as me," Stefani said. "And that is a miracle, you know? And it just saved me so much, and I feel so grateful for that."

Back in the recording studio, Stefani's collaborators began to notice a change in her mood.

"All of a sudden they were like, 'Hey, what's going on with Gwen? She's so happy!" Stefani laughed.

That happiness inspired "Make Me Like You." "It was so fun to be able to write about being saved," she said, "and be happy about it, and share that joy."

She turned it all into an elaborately-choreographed live music video sponsored by Target that aired in a commercial break during this year's Grammys:

She's admits she wrote the song about Shelton, but that's about as far into relationship territory as she's willing to go.

"Look, you can have me say it out loud, or you can just listen to the record," she said. "I feel like I did everything right to, like, say I'm not going to let this ruin my life."

They don't hide the fact they're a couple; they are publicly private. We've seen it all play out in the tabloids, in the sort of over-the-top way these things often go. But she's managed to cope with that, too, by ignoring it.

"Once in a while they'll tap into something that you're, like, 'Wow, really? How could you think that about me? You're wrong! And if I saw you right now, I bet you would never say that to my face!'"

She has never been a shrinking violent, and in a world of 20-something pop stars she has remained remarkably ageless.

But make no mistake: Gwen Stefani has lived a few lifetimes in the last 18 months, and has come out on the other side beaming with new-found optimism that's as bright as those signature lips.

Cowan said, "Just listening to you talk, despite everything that's happened to you over the last year-and-a-half, you almost seem grateful in a way."

"Which I think people would be surprised."

"I'm surprised," she said. "I believe there's a master plan for me, and part of my journey and my cross to bear was to have to go through with what I went through, and I accept it, and I tried to make something good out of it."