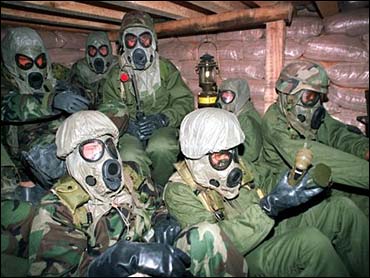 Parting company with the findings of a Clinton administration panel on Gulf War illnesses, a new study concludes more must be learned about the effects of toxic substances on those who fought there.

The Research Advisory Committee on Gulf War Illness urges that up to $60 million be spent over the next four years to monitor and research the health of Gulf War veterans and their children.

In so doing, the panel distanced itself from the earlier body attributed a series of mysterious ailments to stress under conditions of warfare. Scientists are coming close to finding a treatment, the panel said in its report, but it also said researchers need substantially more government financial assistance.

The Associated Press obtained a copy of the report in advance of its expected release Friday by Veterans Affairs Secretary Anthony Principi.

The review committee that Principi formed concluded that "the goal of understanding and treating Gulf War veterans' illnesses is within reach" because of recent research breakthroughs.

But federal research is falling short in large part because studies have not asked important questions and continue to focus on stress to explain the veterans' problems.

"Additional progress in addressing Gulf War veterans' illnesses is not likely to come from a haphazard mix of studies," the panel said.

Department officials declined comment before the review was made public.

Hundreds of thousands of veterans of the 1991 Gulf War have experienced undiagnosed illnesses they believe are linked to the war, according to Congress' auditing arm. These ailments include chronic fatigue, loss of muscle control, diarrhea, migraines, dizziness, memory problems and loss of balance.

Principi's panel found that more recent studies suggest the veterans' illnesses are neurological and apparently are linked to exposure to neurotoxins such as the nerve gas sarin, the anti-nerve gas drug pyridostigmine bromide and pesticides that affect the nervous system.

"Research studies conducted since the war have consistently indicated that psychiatric illness, combat experience or other deployment-related stressors do not explain Gulf War veterans illnesses in the large majority of ill veterans," the review committee said.

The Pentagon has estimated that about 100,000 soldiers were exposed to nerve gas when Iraqi weapons caches were destroyed, although congressional auditors have questioned the Defense Department's estimates. The Pentagon also has said some soldiers may have been overexposed to pesticides.

The committee said the VA should allocate $15 million in each of the next four years for a Gulf War illness research program.

Principi had announced in 2002 that $20 million would be available for research this year. But during the summer, the panel found that little of that had been spent and some of what was went to studies investigating stress-related causes.

Recent research "makes it a very reasonable possibility that this Gulf War illness is not attributable simply to stress of troops that were deployed," said Paul Greengard, who won the Nobel Prize for work discovering the brain mechanisms involved in Parkinson's disease, a nerve disorder.

Greengard is the founder of Intracellular Therapies, which looks for treatments for central nervous system disorders. He said the company recently began investigating how nerve agents damage the brain.

Greengard has done preliminary work funded by the Army that would apply the research methods he used to investigate Parkinson's to study Gulf War illnesses.

"I think any reasonable person can no longer exclude the possibility that our military personnel deployed in Gulf War I were exposed to toxic chemicals that have produced this very high incidence of illnesses," Greengard said.