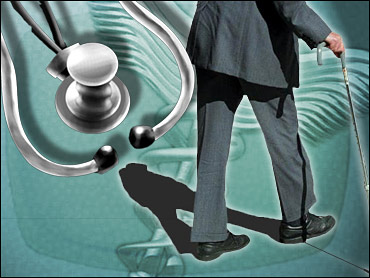 In 1946, 3.4 million babies were born in the U.S., a jump of 22% from the previous year. The surge of births continued, year after year, until 1964. By that time 78 million "baby boomers" had joined the population, creating a huge demographic bulge that flourished in America's postwar prosperity. These children acquired more education than any previous generation; many grew up projecting a rebellious, idealistic attitude that promised to reshape society.

Now, with the first of them turning 60, the baby boomers are about to do something utterly conventional and predictable. They're going to start getting old and begin developing health problems. They're also going to retire from the workforce.

In true baby boomer style, however, they will probably do these things in a new way.

Boomers are expected to live longer than any previous generation of Americans. Of the 3.4 million born in 1946 -- including Bill Clinton, George and Laura Bush, Donald Trump, Susan Sarandon, Steven Spielberg, and Sylvester Stallone -- 2.8 million are still alive. The men can expect to live another 22 years, the women another 25.

One big question looms over these developments: Will those years be vigorous and healthy, or will baby boomers sink into the pain and disability of chronic disease? A lot hangs on the answer.

Baby boomers now make up 26% of the U.S. population. A fragile, dependent population of aging boomers would place tremendous demands on Medicare, and require lots of support from professional caregivers and the boomers' own children.

Widespread obesity among boomers, combined with lack of exercise, could lead to an epidemic of diabetes, which dramatically accelerates aging and leads to a host of chronic diseases. The number of obese Americans 55-64 has jumped from 31% (1988-1994) to 39% (1999-2002), according to Health, United States, 2005, issued by the Department of Health and Human Services.

That suggests that many boomers may be aging more slowly than previous generations because of healthy habits, such as less smoking and more exercise. Maybe 60 really is the new 50.

"The influence of aging on society depends on which view you accept," Gary Burtless, a senior fellow at the Brookings Institution, tells WebMD. "Longer life spans would be a burden if additional years were spent in a frail, dependent condition, but I don't hold that pessimistic view. I think there's a lot of evidence that people are healthier mentally and physically than they used to be."

If boomers remain vigorous and healthy as they age, they could make tremendous contributions to American society.

For one thing, they could remain in the workforce. With American women having an average of just over two children -- just enough to maintain the population -- the workforce will no longer grow as fast as in previous years. A smaller workforce means that economic growth will slow from the typical 2% a year that has prevailed since World War II.

A 2% annual growth rate is very vigorous, however, so a slight slowdown would still produce a rising standard of living for Americans.

"It would just increase more slowly than the past," says Burtless. "I wrote a book a few years ago called Can America Afford to Grow Old? And the answer is yes. We haven't reached the end of improved living standards just because the population is getting older."

If large numbers of boomers remain in the workforce, they will give a significant boost to economic growth.

"If even 5 million baby boomers work instead of retiring, at an average wage of about $50,000 a year, that would add $250 billion to the economy every year," says Peter Francese, founder of American Demographics magazine and a demographic trends analyst for the Ogilvy and Mather advertising agency.

Can Boomers Afford to Retire?

And a lot of boomers say they intend to work beyond the traditional retirement age of 65, primarily because 30% to 50% say they have not saved enough to retire.

"Boomers who retire at 65 need to have enough money to support themselves for 20 to 25 years," said Francese. "You run that model back and you'd better have $2 to 2.5 million in the bank. When baby boomers do that calculation, a lot of them decide they'll keep working."

Many boomers seem to have done that calculation. In a recent AARP survey, "Boomers at Midlife," 23% of boomers said the worst aspect of their life was personal finances. Only 58% believed they could meet their financial goals for retirement.

Not surprisingly, a survey conducted by Merrill Lynch found that nearly 80% of boomers intend to keep working beyond age 65.

And they should be able to find plenty of work, economists say, since the U.S. will face a labor shortage of up to 10 million workers by 2010 because of a smaller pool of younger workers.

David DeLong, DBA, a researcher at MIT's AgeLab and the author of Lost Knowledge: Confronting the Threat of an Aging Workforce, expects that employers eventually will welcome boomers back into the workforce.

"A MetLife study last year found that more than half of preretirees expect to supplement their retirement income, but only 12% who were already retired have actually worked," DeLong tells WebMD. "This suggests that the expectations boomers have about postretirement work may be unrealistic. But I also believe that we're going to reach a tipping point where organizations will suddenly realize there aren't enough young, skilled workers out there, and they'll get more creative about recruiting older workers. So many boomers will continue to work, and they're going to work on their own terms."