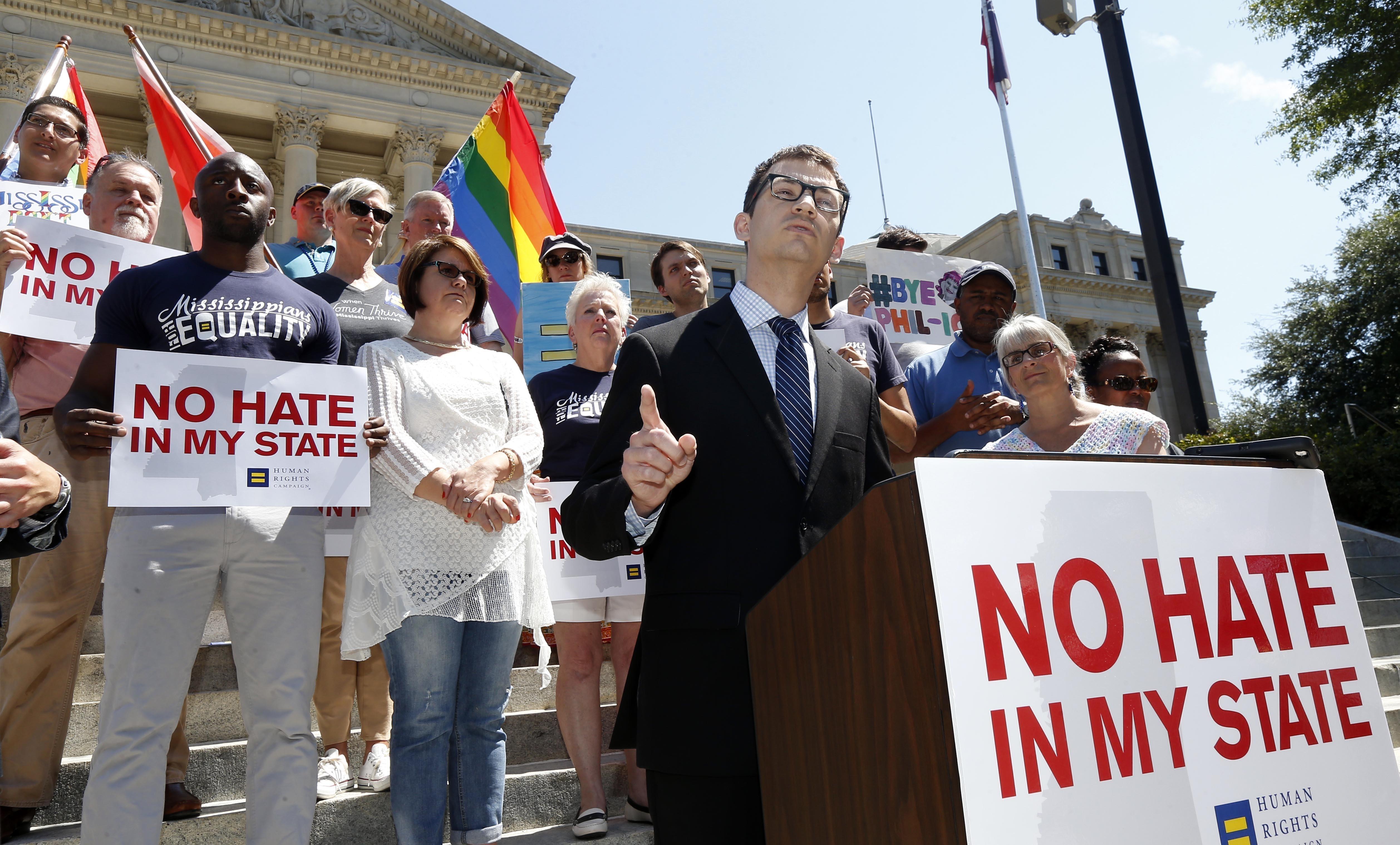 JACKSON, Miss. -- Gay rights groups and others are asking a federal appeals court to keep blocking a Mississippi law that would let merchants and government employees cite religious beliefs to deny services to same-sex couples.

The law championed and signed by Republican Gov. Phil Bryant sought to protect three beliefs: marriage is only between a man and a woman; sex should only take place in such a marriage; and a person’s gender is determined at birth and cannot be altered.

Gay and straight plaintiffs who sued the state filed written arguments Friday with the 5th Circuit, saying the law “acts as an unconstitutional religious ‘gerrymander’ by putting its thumb on the scales to give special protections to one side in that religious debate and not the other.”

The law -- which started as House Bill 1523 -- would have allowed clerks to cite religious objections to recuse themselves from issuing marriage licenses to same-sex couples, and would have protected merchants who refuse services to LGBT people. It could have affected adoptions and foster care, business practices and school bathroom policies.

The plaintiffs’ appeal gives examples of what the law could allow: A restaurant manager refusing to seat a lesbian couple celebrating an anniversary dinner; a jewelry store clerk refusing to sell an engagement ring to straight couple if he believed the couple had previously had sex; social workers being unable to protect a child whose foster parents punished the child for being lesbian, gay, bisexual or transgender; public school counselors refusing to help LGBT students.

“This provision of HB 1523 is arguably the most alarming since it would allow a school psychologist or guidance counselor to cease therapy with a depressed, suicidal high school student who divulges to the counselor that he thinks he might be gay,” says the appeal filed by attorney Roberta Kaplan.

More than 100 bills were filed in more than 20 state legislatures across the nation in response to the June 2015 U.S. Supreme Court ruling legalizing gay marriage, UCLA law professor Douglas NeJaime testified in June during a federal district court hearing on the Mississippi law. NeJaime said Mississippi was the only state to enact a law listing specific beliefs to be protected.

The Mississippi law was supported by Baptist and Pentecostal groups, and the Washington-based Family Research Council gave Bryant an award for signing it. Opponents protested outside the Governor’s Mansion in Jackson and executives of several large companies, including Coca-Cola Co. and Northrop Grumman Corp., called the law as discriminatory and said legislators should repeal it. Multiple lawsuits from gay rights supporters sought to overturn the law.

Mississippi Democratic Attorney General Jim Hood declined to appeal Reeves’ ruling. The governor’s appeal is being handled by private attorneys, including some working for Alliance Defending Freedom, an Arizona-based Christian legal group that helped to write the law.