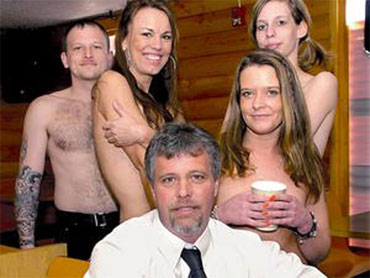 A man accused of killing his two children told authorities he shot them in New Hampshire and buried them in a shallow grave in the Midwest after saying a prayer and making a duct tape cross on each child's chest, according to court documents released Wednesday.

Manuel Gehring, 44, was arrested in California earlier this month after a cross-country trek and was charged with murder. Investigators have yet to find the youngsters' bodies, despite a search across the Midwest.

Gehring told police "that he pulled the van over and shot them with the handgun," according to the documents.

Gehring had been locked in a custody dispute with his ex-wife.

Gehring and the children, Sarah, 14, and Philip, 11, were last seen in Concord, arguing after a Fourth of July fireworks show.

In an affidavit, police said that Gehring told them he returned home with the youngsters after the fireworks, picked up a handgun, drove a half-hour to 45 minutes south of Concord, then pulled over and shot them.

Gehring, according to the documents, said that after killing the children, he drove to western Pennsylvania, where he bought a pick axe, a shovel, a utility knife and scissors at a Wal-Mart.

He then drove another three to four hours to somewhere on Interstate 80 in Ohio, where he left the highway, drove two to three miles and dug graves for his children, the documents said.

"He told police that he said a prayer, fashioned a cross made of duct tape across the chest of both children and buried them in shallow graves," according to the court papers.