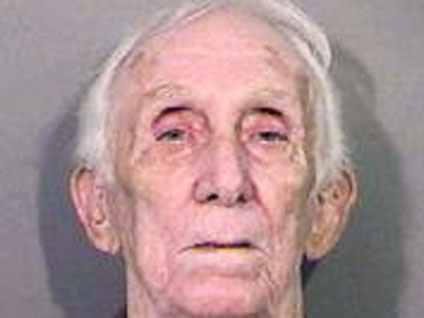 LEBANON, OHIO (CBS/WHIO) Richard Heritz, an 85-year-old Ohio man, was arrested while making a scheduled visit to his grandson at Warren Correction Institution. According to law enforcement,  this "family reunion" included more than 20 grams of marijuana.

According to CBS affiliate WHIO, Patrol and Department of Rehabilitation and Correction investigators received a tip that Richard Heritz was going to take drugs to his grandson, Gregory Heritz, who is incarcerated for a burglary conviction.

Officials say they confronted the senior Heritz when he arrived for his visit Aug. 13, and he voluntarily surrendered one large package containing approximately 22 grams of suspected marijuana, according to WHIO. Marijuana is reportedly worth an average of $23 per gram in Ohio's correctional facilities.

"Attempting to smuggle forbidden items into prison has been ongoing since inmates have been incarcerated," says Julia Bus, a spokeswoman for the Warren Correction Institution.

Heritz is being charged with attempting to convey drugs at a detention facility and possessing criminal tools. If convicted, he could face up to seven years in prison and a $15,000 fine.