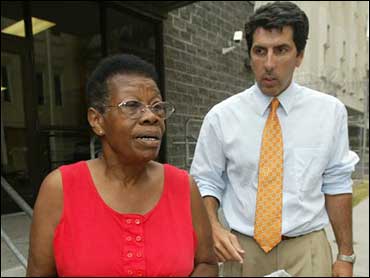 A 73-year-old diabetic grandmother and church elder who ended up in prison for more than two weeks after authorities accused her of looting was released from jail Friday evening.

"I thank God this ordeal is over," she said after being released from the parish jail. "I did nothing wrong."

Police arrested Merlene Maten the day after the hurricane on charges she took $63.50 in goods from a looted deli. Though never before in trouble with the law, her bail was set at a stiff $50,000.

The town of 17,500 across the Mississippi River from New Orleans, has also been criticized for the actions of its police chief, Arthur Lawson Jr., who ordered officers to block a bridge leading into the community, shortly after Katrina's landfall. Gretna is almost two-thirds white. New Orleans is two-thirds black.

Family and eyewitnesses insist Maten only went to her car to get some sausage when officers cuffed her in frustration, unable to catch younger looters at a nearby store.

Despite intervention from the nation's largest senior lobby, volunteer lawyers from the Federal Emergency Management Agency and even a private attorney, the family fought a futile battle for 16 days to get her freed.

Then, hours after her plight was featured in an Associated Press story, a local judge on Thursday ordered Maten freed on her own recognizance, setting up a sweet reunion with her family.

"I'm just gonna hug her and say 'Mom, I'm so sorry this had to happen,"' Maten's tearful daughter, Elois Short, told AP shortly after getting the news.

Maten must still face the looting charge at a court hearing in October. But the family, armed with several witnesses, intends to prove she was wrongly arrested outside the hotel.

"There were people looting, but she wasn't one of them. Instead of chasing after people who were running, they (police) grabbed the old lady who was walking," said Short, who works in traffic enforcement for neighboring New Orleans police.

Defense attorney Daniel Becnel, family members and witnesses said police snared Maten in the parking lot of a hotel after floodwaters swamped her New Orleans home. She had paid for her room with a credit card and followed authorities' instructions to pack extra food, they said.

She was retrieving a piece of sausage from the cooler in her car and planned to grill it so she and her husband, Alfred, could eat, according to her defenders. The parking lot was almost a block from the looted store, they said.

"That woman was never, never in that store," said Naisha Williams, 23, a New Orleans bank security guard who said she witnessed the episode and is distantly related to Maten. "If they want to take it to court, I'm willing to get on the stand and tell them the police is wrong. She is totally innocent."

Police Capt. Steve Carraway said Wednesday that Maten was arrested in the checkout area of a small store next to police headquarters.

The arrest report is short and assigns the value of goods Maten is alleged to have taken at $63.50. The items are not identified.

"When officers arrived, the arrestee was observed leaving the scene with items from the store. The store window doors were observed smashed out, where entry to the store was made," police reported.

Christine Bishop, the owner of the Check In Check Out deli, said that she was angry that looters had damaged her store, but that she would not want anyone charged with a crime if the person had simply tried to get food to survive. "Especially not a 70-year-old woman," Bishop said.

"Why would someone loot when they had a car with a refrigerator and had paid with a credit card at the hotel?" asked Becnel. "The circumstances defy the theory of looting.

Three days after Hurricane Katrina made landfall, Gretna officials learned that people trapped in downtown New Orleans were being told to make their way over the bridge called the Crescent City Connection.

Officials quickly organized a bus caravan to take 6,000 victims to an evacuation center about 16 miles away, but they were overwhelmed, as people began gathering near a mall just over the bridge.

Looting and a fire inside the mall convinced Lawson that his city, itself without power and water, could not handle the masses pouring in from New Orleans. He ordered rifle-carrying officers to block the bridge.

"We all of a sudden were receiving hundreds of people who were being told, 'If you cross over the bridge there was food, shelter, water and buses,' which we had none of," Lawson said Thursday in an AP interview.

"Basically, we had people thrust at our doorstep, and we were unprepared," he said. "If the city of New Orleans was unprepared, how can we, in a city of 3.5 square miles, be prepared?"

The move gained notoriety after two emergency responders from San Francisco who were in the crowd turned back by police wrote about the incident in a socialist newspaper.

Criticism surfaced again Thursday from New Orleans Mayor Ray Nagin, who lashed out at the neighboring city during a news conference.

"When we allowed people to cross the Crescent City Connection because people were dying in the convention center, that was a decision based upon people," Nagin told reporters. "Now, if they made a decision based upon assets, to protect assets over people, and to have attack dogs and armed people with machine guns, then they're going to have to live with that."

Lawson said his officers did not carry machine guns. He said allowing people into Gretna was not an option, in part because the town already was under an evacuation order.

"It was a situation that was hostile and volatile because people in New Orleans were given misinformation. Lawson said.