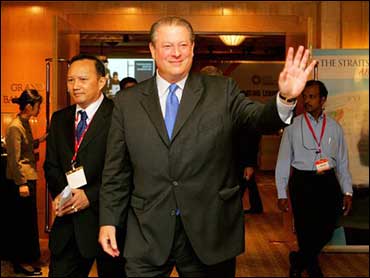 Former Vice President Al Gore said Tuesday that some of the world's largest energy companies, including Exxon Mobil Corp., are funding research aimed at disputing the scientific consensus on global warming as part of a campaign to mislead the public.

"There has been an organized campaign, financed to the tune of about $10 million a year from some of the largest carbon polluters, to create the impression that there is disagreement in the scientific community" about global warming, Gore said at a forum in Singapore. "In actuality, there is very little disagreement."

"This is one of the strongest of scientific consensus views in the history of science," Gore said. "We live in a world where what used to be called propaganda now has a major role to play in shaping public opinion."

Gore likened the campaign to that of the millions of dollars spent by U.S. tobacco companies years ago on creating the appearance of uncertainty and debate within the scientific community on the harmful effects of smoking cigarettes.

"Some of the tobacco companies spent millions of dollars to create the appearance that there was disagreement on the science. And some of the large coal and utility companies and the largest oil company, ExxonMobil, have been involved in doing that exact same thing for the last several years," Gore said.

After the U.N. Intergovernmental Panel on Climate Change, made up of a number of the world's top climate scientists, released a report in February that warned the cause of global warming is "very likely" man-made, "the deniers offered a bounty of $10,000 for each article disputing the consensus that people could crank out and get published somewhere," Gore said.

"They're trying to manipulate opinion and they are taking us for fools," he said.

ExxonMobil spokesman Gantt Walton said Tuesday that the company's financial support for scientific reports did not mean it influenced the outcome of those studies. ExxonMobil believes the risk that greenhouse gas emissions are contributing to climate change warrants taking action to limit them, he said.

"The recycling of this type of discredited conspiracy theory diverts attention from the real challenge at hand: how to provide the energy needed to improve global living standards while also reducing greenhouse gas emissions," he said.

Gore said that with growing awareness of climate change, the world will see an acceleration in efforts to fight the problem, and urged businesses to recognize that reducing carbon emissions is in their long-term interest.

But while Washington should lead by example, he said developing nations also have to play a part.

"Countries like China, just to give an example, which will next year be the largest emitter in the world, can't be excluded just because it's technically a developing country," Gore said. "When you look at the absolute amount of CO2 each year and going forward, China will soon surpass the U.S."

As its economy expands, China faces an increased risk from the effects of climate change and must find ways to leapfrog old, polluting technologies in ways that can maintain growth, Gore said.

In June, the Netherlands Environmental Assessment Agency said China overtook the United States in carbon dioxide emissions by about 7.5 percent in 2006. China was 2 percent below the U.S. in greenhouse gas emissions in 2005, the agency said.