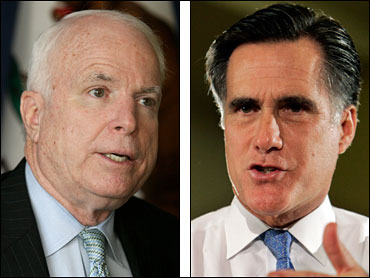 Six months ago, Sen. John McCain was considered washed up in the presidential campaigns. Now he's leading in at least one national poll. CBS News anchor Katie Couric interviewed both McCain and his chief rival,

Speaking with both McCain and his wife, Cindy, Couric asked: :"Do you guys look at each other and say whodathunkit?"

"A lot of that had to do with after Labor Day, voters started looking at the candidates and we had a good debate up here," McCain said. "And General Patreaus' surge has given me credibility."

"Let me ask you about down the road, if in fact the democratic nominee is Barack Obama, and you are in fact the Repubican nominee, there will be a big difference in your ages," Couric said. "You think that will become an issue on the campaign?"

"I think anyone who has watched me knows the energy I have always had," McCain said. "I have out-campaigned anybody. I believe that if Sen. Clinton, Sen. Edwards or Sen. Obama are the nominees or the party, all of whom I now well and respect, we will have a respectful debate. There won't e any of these negative ads, personal attacks and things like that. The American people are hungry for a debate on the issues. I look forward to any those three with their positions and their philosophy debating mine and I think there American people want that rather badly right now."

McCain's main rival in New Hampshire, former Massachusetts Gov. Mitt Romney, campaigning in his own back yard, and outspending everyone - $53 million through September - and still finding himself behind here.

"John McCain won here in 2000, beating George Bush by a wide margin," Romney told Couric. "He's got a network here. He's been endorsed by all the papers here. That's his constituency. And so I recognize this is an uphill fight for a guy to get into a race who's relatively unknown and fight his way to the top and here I am either right about to beat him or going to beat him."

Couric said: "You must be a bit frustrated here governor. C'mon, level with me on that."

"How can I be frustrated? This is fabulous!" Romney said. "Literally, at the beginning of my campaign I was number five or six off the list."

Does he make any apologies for basically flooding the press with negative attacks about both Mike Huckabee and McCain?

"Have you seen what comes on my side? I have been attacked from the very beginning of this campaign in a personal way. The messages that we send out describe differences on issues and record. In a campaign you're trying to describe the very important differences that exist between you and your opponents on your record and on your positions. But it's very different when you call someone names or impugn their character.

His primary message: Washington is broken, and he says he's the only viable Republican when you look at the Democratic field.

"If we send another, long-term, well-experienced U.S. senator named John McCain to go up against Barack Obama it'll be a tsunami for Barack Obama," he said. "The only way to beat [Obama] is to put someone up against him who also can speak about change, but who has a record of bringing about change."

"You make it sound as if he is the presumptive nominee for the Democratic Party," Couric said.

"He's a possible nominee for the Democratic Party," Romney said.

Does he think Obama's got the nomination?

"Well I used to think that Hillary Clinton was the sure-fire nominee. I'd give it like a 90 percent chance that she was the nominee. But gosh, Obama has really ignited enthusiasm and it's not because of his track record," Romney said. "I just don't think they're going to send back a Washington insider to overcome what is an enormous, pent up anger over the absence of real change there."