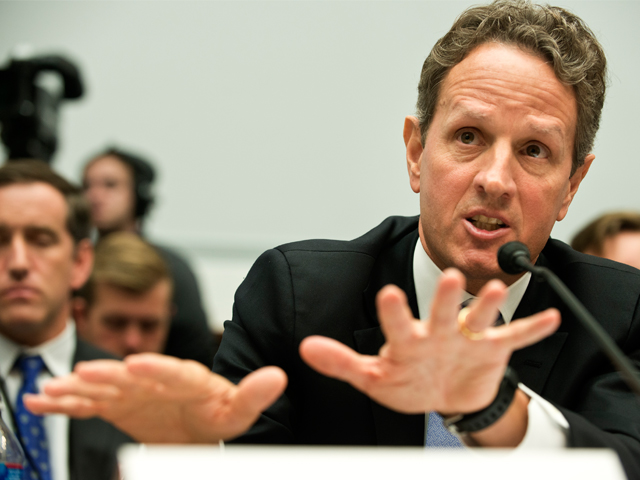 Geithner defended his actions at a hearing Wednesday of the House Financial Services Committee.

Geithner, who was then president of the Federal Reserve Bank of New York, said he immediately alerted U.S. and British regulators in 2008 when he learned of problems with the London interbank offered rate, or LIBOR. He also said the problems were written about in the financial media.

"I felt that we did the important and fully appropriate thing," Geithner testified.

"You have appeared before this committee countless times since 2008," Garrett said. "Why did you never mention it to the committee?"

Britain's Barclays bank admitted last month that it had submitted false information to keep the rate low. The bank was fined $453 million in settlements with U.S. and British regulators, and its chief executive resigned.

Documents show the New York Fed learned in 2007 that Barclays was manipulating the rate.

Other major banks, including Citigroup Inc. and JPMorgan Chase & Co., are under investigation for similar violations.

The European Union proposed Wednesday to make manipulating the Libor and other key global interest rates a crime.

A British banking trade group sets the LIBOR every morning after international banks submit estimates of what it costs them to borrow money. The rate affects trillions of dollars in contracts around the world, including mortgages, bonds and consumer loans.

Republicans weren't the only members questioning Geithner on the LIBOR scandal. Rep. Brad Miller, D-N.C., wanted to know whether Geithner had informed the Justice Department about the problems.

Geithner said he did not.

Some GOP lawmakers also asked Geithner why, as president of the New York Fed, he used a rate he knew in 2008 to be flawed as the basis for billions of dollars in bailout loans to big financial companies in the crisis.

Rep. Barney Frank of Massachusetts, the panel's top Democrat, defended Geithner's actions. He noted that Geithner informed the top U.S. regulators in 2008 during the administration of President George W. Bush.

Federal Reserve Chairman Ben Bernanke and then-Treasury Secretary Henry Paulson were responsible for most of the decisions on the bailout, Frank said.

"You were important, but not one of the top administration officials," Frank told Geithner.