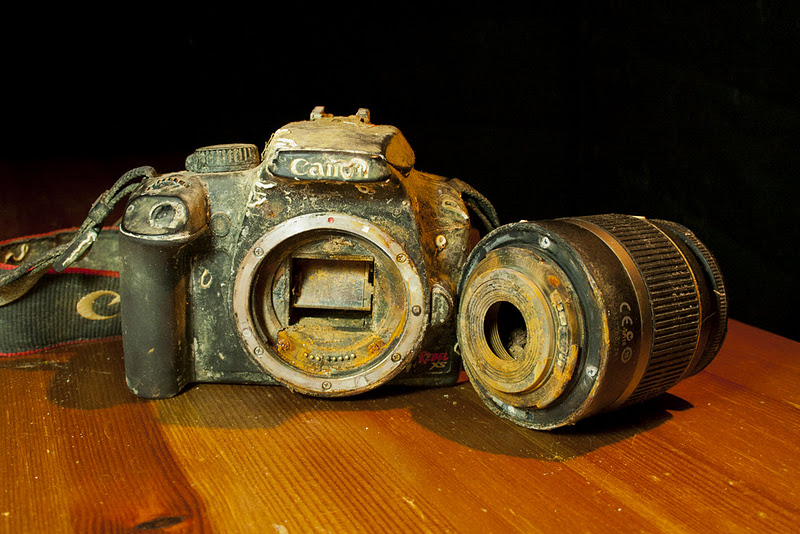 Social networking and a bit of amateur sleuthing have reunited a Canadian firefighter with the camera he accidentally dropped to the bottom of the sea during a family vacation more than a year ago.

Stephen Wood was sure he'd said a final goodbye to his Canon EOS Rebel when it slipped from his hands into the Deep Bay off the east coast of Vancouver Island last summer.

"We figured the camera and the pictures were gone. We didn't even bother trying to retrieve it," Wood told CNET today. "It was on when it went in the water, and [it was] salt water, and at high tide, I think it's roughly about 60 feet deep there. It was also like 9 o'clock at night so it was dark." Not to mention that Wood and his wife had a baby in tow.

Conditions, in other words, were hardly ideal for a gadget-retrieval operation, so Wood accepted that he'd seen the last of the cam he'd received as a wedding gift from his firefighter pals.

Until this week, when he received a bizarre call from FireFit Canada, an organization that sponsors firefighter fitness events in which Wood has participated.

A diver named Markus Thompson, he was told, had just found a crusty camera at the bottom the ocean, retrieved the photos from its SD card, and posted them to Google+ with a plea to the Internet hive mind for help finding the owner.

Actual story: found off the end of a wharf in Deep Bay, BC while I was diving (completing a biological survey) in the harbour. I removed the SD card, cleaned it up, stuck it in a card reader and after being underwater in a corroding camera since August 2010 - it works!

Along with pictures of the battered camera, Thompson posted three shots recovered from the 2GB SanDisk Extreme III CompactFlash. Thompson's Google+ followers contacted Canon with a serial number, dropped pictures into Google search, and suggested examining EXIF data. But ultimately, it was one of the saved pics--a bag with the FireFit logo sewn on--that led to FireFit Canada, and to Wood's identification.

"The photographs, having spent 440 days on the ocean floor, have been reunited with the photographer and the family. I am very happy to have facilitated the journey back to where the photographs belong!" Thompson wrote in a Google+ update.

In a thank-you note to Thompson, Wood wrote that "seeing the pictures brings tears as we really had forgotten what we were missing by not having them."

Wood and his wife, Shannon, plan to thank their camera's rescuer in person soon, and get the camera and SD card back so they can give them a warmer, more comfortable home "in a glass display box somewhere in our house."

But in the end, the firefighter is less struck by the camera and data's survival than by social networking's role in the story. "I mean, go back seven, eight years and this would have never happened," he said. "We didn't have things like Google+ and Facebook back then. Posting pictures at the wharf...that would have been your own only option."

Shannon Wood, in fact, joined Google+ just this morning. Guess who one of the first people in her Circles will be?

Thanks to CNET reader Loannis V. for the story tip.