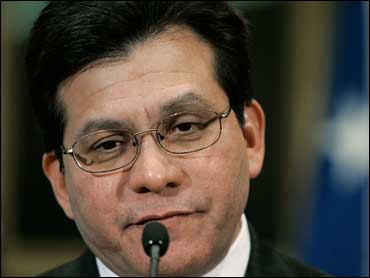 This column was written by the editors of the National Review Online.

The story of the eight fired U.S. attorneys has been relentlessly over-hyped. We do not know that any of them was fired because the administration put its political interests ahead of his or her prosecutorial judgment. Sen. Dick Durbin's recent insinuation that the attorneys who were not fired had kept their jobs by compromising their prosecutions was outrageous.

If congressional Democrats are wrong to bluster, however, they are within their rights to investigate. They may yet turn up enough evidence to prove that some of the firings were improper violations of political norms.

We do not need more evidence, however, to reach a conclusion about the suitability of Alberto Gonzales for the leadership of the Department of Justice. While we defended him from some of the outlandish charges made during his confirmation hearings, we have never seen evidence that he has a fine legal mind, good judgment or managerial ability. Nor has his conduct at any stage of this controversy gained our confidence.

His claim not to have been involved in the firings suggests that he was either deceptive or inexcusably detached from the operations of his own department. His deputy, Paul McNulty, insulted the fired prosecutors by claiming that they had been asked to resign for "performance-related issues." But many of them received good reviews, and none of them said he was told about any disappointment with his performance. If Justice wanted to clear them out to make way for new blood, or to find attorneys who shared their prosecutorial priorities, that would have been perfectly legitimate. By saying what he did, McNulty guaranteed that the fired attorneys would lash out in the press. Gonzales' latest tactic has been to concede that improper motives may have played a role in the firings, but to blame his underlings for any misconduct and to pledge to get to the bottom of it.

What little credibility Gonzales had is gone. All that now keeps him in office, save the friendship of the president, is the conviction of many Republicans that removing him would embolden the Democrats. It is an overblown fear. The Democrats will pursue scandals, real or invented, whether or not Gonzales stays. But they have an especially inviting target in Gonzales. He cannot defend the administration and its policies even when they deserve defense. Alberto Gonzales should resign. The Justice Department needs a fresh start.