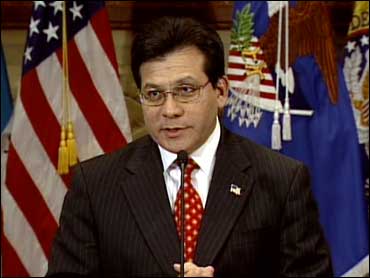 
Sen. Chuck Schumer voted against the confirmation of Alberto Gonzales as attorney general, and now he's in the headlines again because he hasn't changed his mind. Faced with Schumer's brief against Gonzales in the furor over the firing of eight U.S. attorneys, counsel for the defense would have a very tough time denying management failings at the Department of Justice.

Yes, it's perfectly legitimate for the administration to replace U.S. attorneys who, as political appointees, serve at the pleasure of the president. President Clinton, after all, sacked all 93 U.S. attorneys when he took office in 1993. Critics of the current administration are sputtering that politics may have been involved in the recent firings. But guess who usually recommends U.S.-attorney nominees? U.S. senators. Politics will always have some role in these appointments, and there's nothing wrong with that, so long as no one is improperly influencing criminal cases.

But the Gonzales Justice Department managed to mishandle the firings into a scandal. At one point, the department said that the U.S. attorneys had been removed for "performance-related" reasons. Most of the fired prosecutors understandably considered this a smear and were outraged. Both Gonzales and his top aides have now offered serial justifications of the firings, and have said misleading things about who ordered them. Gonzales says he wasn't aware of his just-resigned chief of staff's coordination with the White House concerning the U.S. attorneys — a highly embarrassing line of defense.

This episode coincides with an internal audit's revelation that the FBI has misused national-security letters, a kind of subpoena the FBI can issue without the approval of a judge or prosecutor. This second controversy, along with the U.S.-attorney fiasco, has fueled calls for Gonzales's resignation and sparked demands that the executive branch's authority be circumscribed. If forced to choose, we'd much prefer the former. The administration's supporters should consider whether the price of keeping Gonzales in office will be the surrender of important policies in order to try to appease his critics.

Seeing opponents of the administration pile on over the "purge" understandably gets conservatives' backs up. Take Jack Cafferty, CNN's cheap version of MSNBC's lefty blowhard Keith Olbermann. This week, Cafferty — a member of the "best political team on television" according to poor Wolf Blitzer, who is forced to say so roughly every 15 minutes — called Gonzales "a glorified water boy for the White House" and offered the hackneyed opinion that "if you look up the word 'weasel' in the dictionary, Wolf, you'll see Alberto Gonzales's picture there." Clever.

Then there's the liberal hypocrisy. During the 1995 congressional hearings that attempted to determine the FBI's precise role in the fiery deaths two years earlier of 86 people, including 26 children, in Waco, Texas, then-Rep. Chuck Schumer accused Congress of "Monday-morning quarterbacking." Facing a clearly inadequate FBI review of its actions in Waco, Schumer declared, "If we did hearings on D-Day, we'd end up court-martialing General Eisenhower." In 1993, when attorney general Janet Reno lamely responded to the deaths by saying, "I'm accountable — the buck stops with me," her Democratic supporters on Capitol Hill were entirely satisfied with her performance.

So there is plenty of political opportunism in the campaign to get Gonzales's scalp. But it's not just personnel that are at risk in partisan fights. Blunders in the U.S.-attorney controversy have already forced a costly reversal in policy. The administration has dropped its opposition to Democratic legislation that would restore federal judges' ability to appoint interim U.S. attorneys, a practice that the Bush administration had rightly seen as an improper intrusion on executive prerogatives.

Next will be an assault on the Patriot Act, thanks to the FBI's inexcusable bungling of the national-security letters. It appears that at least some NSLs mislead the parties to whom they were issued or were obtained in circumstances where their use was not warranted. The Bureau also didn't keep proper records of NSL use, creating a situation in which Congress was unable to obtain accurate information from the executive branch and was thus impeded in exercising its oversight function.

Critics of the War on Terror say that the FBI shouldn't have the authority to issue these letters in the first place. Although we have supported most of the legal changes designed to aid the war, on this issue we are inclined to agree that the FBI's authority should be scaled back. Attorneys at the Justice Department should sign off before the FBI issues NSLs. This change can be made administratively, and requires no revision of the Patriot Act.

Although these fumbles don't rise to the level of a firing offense, Alberto Gonzales could yet become a liability on matters more important than he is. When he took office, Gonzales pledged to put the mission and well-being of the Department of Justice above all other considerations. We hope he still feels that way, even in the face of pressure to appease his liberal critics.
Reprinted with permission from National Review Online