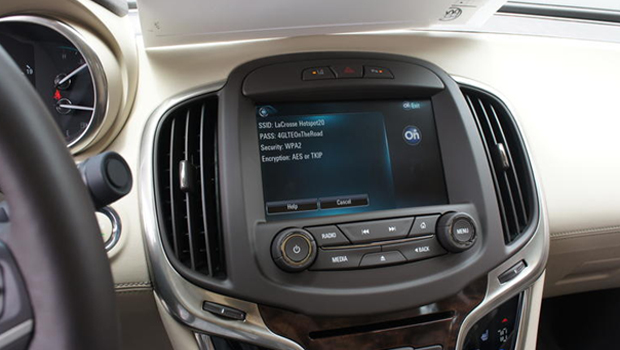 PALO ALTO -- Riding down the freeway in the passenger seat of a 2015 Buick LaCrosse, I stared at my Nexus 7 tablet, watching a video on YouTube where John Oliver delivered an incisive critique of income inequality in the U.S. Usually, in a new car like this, I would want to be in the driver's seat, checking power, ride feel, and handling, but in this instance I was checking out the car's 4G data connection, part of the newest OnStar hardware.

GM may not be the first to include a 4G connection in a production car, an honor that goes to the Audi A3, but it will offer the most models in the shortest amount of time--over 30 models from GM brands Chevrolet, Buick, GMC, and Cadillac will include 4G-connected OnStar by the end of 2014. All GM models should have this fat pipe by the end of 2016.

During a drive in the San Francisco Bay Area, I read email, watched YouTube clips, and watched a movie from the Google Play store on my Nexus 7 tablet, with data streaming over the WiFi connection. According to GM, the connection can handle up to seven devices, enough to keep most families entertained.

This test did not run perfectly, however. While on the freeway the data connection decided to quit, and would not return until the car was restarted. A GM spokesperson put it down to this particular 2015 LaCrosse being a pre-production model. I thought it might be similar to when my iPhone sometimes stops receiving data and needs a reboot. The connection problem proved unique to this car, as another half-dozen Buicks toting journalists experienced uninterrupted data for the ride.

I suggested to the GM employees about that it might be worth putting a connection reset button in the car's head unit. Those with children agreed, imaging how their progeny would freak out if the data stopped during a road trip.

With the car's connection back up, I performed a few bandwidth tests at a spot where my own phone, on the same AT&T data network as OnStar, was only showing one bar and a 4G, not LTE connection. The car repeatedly average around 10 megabits per second, with maximums hitting over 15 megabits per second. It's an impressive data rate, and should support streaming video simultaneously on three devices.

GM noted that the car's larger antenna will give it a better connection than a phone.

Beyond powering the car's WiFi hotspot, letting passengers use their connected devices, this 4G connection also powers OnStar services, such as vehicle diagnostic reports, stolen vehicle recovery, and turn-by-turn directions sent to the car by an OnStar adviser. The feature I find most interesting is the connection between the car and OnStar's RemoteLink app. This app lets you remotely start the engine, unlock the doors, and even send destinations to the car from the phone.

However, there is a big piece missing from the equation. The data connection doesn't have much interaction with the car's head unit. There isn't any sort of Internet-based local business search integrated with the car's navigation system, short of calling an OnStar adviser. Pandora's music streaming app is built into the car, but it only runs through your phone's data connection. GM has not fully exploited this data connection by offering data-driven applications on its cars' touchscreens.

I asked Phil Abrams, GM's head of infotainment systems, if the cars would be evolving to make better use of this fat data pipe. He remained vague on the subject, saying that GM car head units would evolve as a cohesive system around the data connection, similar to the manner in which driver assistance features are moving from discrete pieces to a cohesive, networked system. It sounds promising, but GM isn't there yet.

GM previously announced it was relying on AT&T for the OnStar 4G data connection, but you won't have to sign a contract with AT&T. Instead, purchasers of a GM 4G-connected car will get a complimentary three months or 3 gigabytes worth of data. Afterwards, OnStar will offer a number of data plans, along with its usual set of services. Rates start at $5 for 200 megabytes per month, and go up to $50 for 5 gigabytes per month. You can also pay a one-time fee of $150 for 10 gigabytes over a 12 month period.

OnStar is currently only available in North America and China, but GM plans to begin rolling out the telematics and data service in Europe.

This article originally appeared on CNET as Buick rolls with 4G