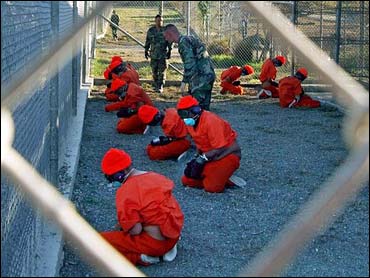 A Navy lawyer accused of passing secret information about Guantanamo Bay detainees printed information about the suspects from his classified government computer and mailed it to a human rights lawyer in a Valentine's Day card, prosecutors said Monday.

Lt. Cmdr. Matthew M. Diaz's actions endangered the lives of the detainees and of American troops on the front line in the fight against terrorism, prosecutor Lt. James Hoffman said in opening statements of Diaz's court-martial.

But defense attorney Lt. Justin Henderson said the information was not marked classified and that Diaz had no reason to think that the document "could be used to injure the United States."

Diaz was near the end of a six-month stint at the U.S. military base in Cuba — where foreign terror suspects have been held by the U.S. military since 2002 — when he went to his office on a Sunday night in January 2005 and used his classified computer to log onto a Web-based database with information about the detainees, Hoffman said.

Diaz printed information including the names of 550 detainees, their nationalities and other information about them, Hoffman said.

Diaz then "cut that document into 39 sheets so that the nation's secrets fit inside this card," Hoffman said as he held up to the jury a copy of the card, with a big heart and a Chihuahua on its front.

Human rights attorney Barbara Olshansky testified that the document in "this weird valentine" she received in early 2005 was not marked classified.

At the time, Olshansky worked for the Center for Constitution Rights. She said the nonprofit legal group was suing the federal government to obtain the names of detainees because the U.S. Supreme Court had ruled that the detainees had the right to challenge their detention.

Olshansky tried to give the document to the judge in that case, but the judge sent a security officer to pick it up, and eventually the Justice Department and FBI investigated.

Olshansky also testified that she never had met or spoken with Diaz.

Diaz, 41, worked as a staff judge advocate at Guantanamo Bay, where he provided counsel to the military command in charge of the detention center but was not involved in detainees' cases, the Navy said.

He originally faced 36 years in prison if convicted, but some charges have been consolidated and the maximum punishment now is 24 years, Navy spokesman Kevin Copeland said.

Diaz remains free and is stationed in Jacksonville, Fla.