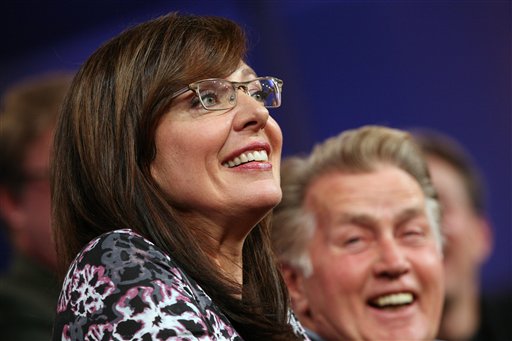 Fortunately for Robb Nen and the San Francisco Giants, they had a place to put Mark McGwire.

The Giants intentionally walked McGwire to load the bases with one out in the ninth Sunday, before escaping with their ninth straight win, 6-5 over the St. Louis Cardinals.

"The more times you face him, the more chance your luck is going to run out," said Nen, who was pitching for the third straight day. "I'm glad I had that open base to put him on."

The Giants were leading 6-5 when Nen came in to start the ninth. After allowing a single to pinch-hitter Willie McGee and a double to Delino DeShields, Nen struck out Ray Lankford for the first out.

Giants manager Dusty Baker, who ordered three intentional walks to McGwire on Saturday, said he never considered pitching to him in the ninth.

"That was the easiest decision I've made all year," Baker said.

Nen retired the next two batters on ground balls for his 18th save and San Francisco's first three-game sweep at Busch Stadium since 1984, when Baker was playing for the Giants.

"All I know is every time we come here it's a battle," Baker said.

Cardinals manager Tony La Russa, who is usually reluctant to talk about opposing players, was complementary toward Nen.

"It takes a pretty special pitcher to retire Ray Lankford and Brian Jordan," La Russa said. "My had goes off to Nen."

McGwire, the major league-leader in home runs with 28, went 2-for-3 with two doubles and two walks for the Cardinals, who have lost eight of nine.

San Francisco came back from a 4-0 deficit on Brian Johnson's solo homer in the fourth and five runs in the seventh to make a winner out of starter Mark Gardner (5-2).

Rey Sanchez led off the seventh with a single off Cardinals starter Kent Mercker (5-4). After Gardner doubled, Darryl Hamilton drove in two runs with a double. One out later, Barry Bonds tied the game with a sacrifice fly. Jeff Kent knocked Mercker out with his seventh homer to make it 6-5.

The Cardinals scored four runs in the first off Gardner on RBI singles by Jordan and Mabry and a two-run single by Tom Pagnozzi. Gardner allowed five runs and eight hits in six innings.

Notes: McGwire tied Bonds for the NL lead with 12 intentional walks. ... Lankford is 4-for-30 with seven strikeouts in his last seven games. ... The Cardinals bullpen has blown 11 of 27 save opportunities. ... Hamilton had three hits and has an eight-game hitting streak (16-36 .444). ... Bonds has reached base in 32 straight games. ... Pagnozzi left the game after the third inning with a strained right calf muscle and is listed as day-to-day.