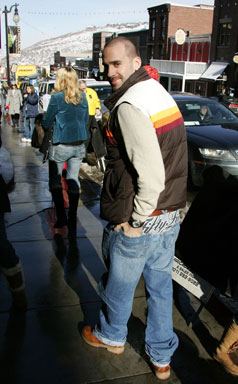 While Danny Darwin didn't have his best stuff, it good enough to for his first win in nine starts.

It was the Giants first four-game sweep at Philadelphia since July 6-8, 1992. Coming in, the Giants had won just 13 of their last 22 games overall.

"There was a period where it took us two weeks to win four games, so we're very pleased with this series." Giants manager Dusty Baker said. "We're starting to hit the ball, and we played better defense."

Darwin (7-9), who had lost six consecutive decisions, allowed four hits in five shutout innings, striking out three and walking three. He stranded five runners in scoring position to win for the first time in nine starts since June 8 against Seattle.

"I didn't have anything," said Darwin, 7-1 against Philadelphia. "They hit some balls hard but they went right to people."

Darwin got some defensive help in the fourth. With the Giants ahead 2-0, shortstop Rich Aurilia made a diving stop of Doug Glanville's liner with two runners in scoring position.

"It was the turning point of the game," Baker said. "The guys played good defense. That's something that hurt us before we got here. The guys were alert and made the plays."

"We definitely went backwards in the this series," Phillies manager Terry Francona said. "We have to pick it up on the road trip and that's not an easy thing to do."

Bonds, ejected from Sunday's game for fighting with reliever Ricky Bottalico, went 1-for-3 and finished the series 7-for-14 with eight RBIs. He popped up on his first pitch from Bottalico in the ninth.

There was more fallout from Sunday, when the benches cleared twice. Benard and Philadelphia manager Terry Francona got into a shouting match before the game. During the game, Phillies reliever Wayne Gomes and J.T. Snow had a heated exchange of words, and both benches filed onto the field. But it didn't escalate any further.

Benard went 12-for-18 (.667) in the series with four doubles and seven runs scored. He wasn't even in the starting lineup for Friday's game until Darryl Hamilton was traded and ended up starting all four games - two in center and two in right.

"This was, by far, the best series I've ever had in the majors," Benard said.

"I gave up two runs with two outs, that's going to hurt you," he said. "I felt real good, I just made a couple of bad pitches with two outs."

Bonds hit a sacrifice fly in the first, and Brent Mayne singled home a run with two outs in the fourth.

Bonds had an RBI single in the fifth. Scott Rolen hit his 23rd homer off John Johnstone in the seventh, and Kent hit a two-run double off Bottalico in the ninth.