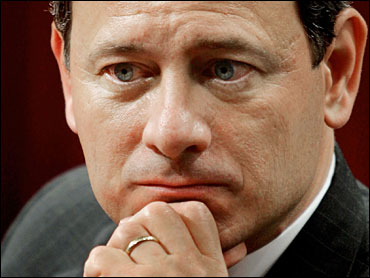 This column was written by Byron York

It's safe to say that Ralph Neas, head of the liberal lobbying group People for the American Way, is very, very unhappy with Sen. Russell Feingold. Holding court with reporters in the hallway outside the Senate Judiciary Committee meeting room Thursday, Neas at first said he was "disappointed" by the Wisconsin Democrat's decision to vote in favor of Supreme Court Chief Justice nominee John Roberts. And then Neas thought more about it. This wasn't the first time with Feingold, he said; there was another vote, in 2001, when Feingold stood "against the Constitution," breaking ranks with Democrats to support John Ashcroft's nomination to be attorney general.

"There have been two overwhelmingly important votes in the last four and a half years regarding the Constitution," Neas said. "One, on Sen. Ashcroft when he was up for attorney general, and today's vote with respect to John Roberts. On both votes, Sen. Feingold voted against the Constitution and against the interests of the American people, and we're especially disappointed in him."

A few feet away from Neas, Nan Aron, head of the equally liberal Alliance for Justice, was being a bit more diplomatic; she would say only that she was "disappointed" with Feingold. His decision, she said, had come as a surprise. Well, actually, more than a surprise.

"I was shocked by his vote," Aron said.

A reporter asked if Aron had been surprised by any other votes.

"And I guess it would be fair to say I was shocked, I was very surprised by Leahy's vote yesterday," Aron added, still seeming a little shell-shocked after Patrick Leahy, the ranking Democrat on the committee, announced that he, too, would vote for Roberts.

It was that kind of day for the people who had once hoped to stop the Roberts nomination. Feingold, Kohl, and Leahy had joined all ten Republicans on the Judiciary Committee to approve Roberts and send his nomination on to the full Senate. For the activists of the left, there was no way to spin that as anything but a loss, and Neas didn't try. "Today was a defeat," he said. "There's no question about that."

Both Neas and Aron made clear that they felt the Democratic vote was only nominally about John Roberts. More important, they explained, was the coming nomination to replace the retiring Justice Sandra Day O'Connor. "Hovering over this entire proceeding was the second vote," Aron said, "and I think the senators simply made a calculation as to how a yes vote or a no vote would affect their standing to fight the next nomination. Some concluded yes, and some concluded no."

The thinking was that a Democrat who voted for Roberts would have more credibility to oppose the next nominee. It was a reasonable position — just look at how many Republicans have cited their vote in favor of Ruth Bader Ginsburg as a reason that Democrats should support President Bush's nominees &3151 but Neas rejected the logic.

"That was not our position," he said. "We thought strongly that more votes against the nominee would be a better signal, because the White House has time and again misled the Congress, intimidated the Congress — "Hi, senator," Neas said, interrupting himself to greet Republican Sen. Lindsey Graham as he passed by. " — and I think that Rove and Bush respond to strength. They don't respond to weakness."

The problem, of course, is that Democrats, with 45 votes in the Senate, are not in a position of strength. And that, in turn, does not lend great strength to groups like People for the American Way and the Alliance for Justice.

"What can you do beyond what you've done this time?" a reporter asked Neas.

"I think that we did an extraordinary amount this time," he answered, "and I think there will be even more of an effort if there is someone in the mold of Thomas and Scalia in the next vacancy, and of course in the next vacancy you're talking about a swing justice."

"More of an effort will certainly build upon the 25 state coalitions that we put together, the millions of our constituents who contacted the Senate over the last seven or eight weeks, and I think that the senators who voted against us this time — I believe it wasn't so much about the merits of [Roberts]. It was how best to position themselves for the next nominee, because that will be a swing vote, and I think that could make an extraordinary amount of difference."

Of course, that all depends on who President Bush chooses to fill the O'Connor vacancy. Even if every Democrat sides with Neas and Aron, the White House will win if Republicans unite behind the nominee. That leaves Democrats just one option: the filibuster. Neas told reporters it was too early to think about that, but at the same time he hinted it might be in store. "If someone is named to the right of Sandra Day O'Connor," he said, "I think there is a very strong likelihood the Senate will reject that nomination."

But if Republicans support the nominee, it seems likely that — the "Gang of 1" agreement notwithstanding — the GOP will act to stop a filibuster. And Democrats, along with the groups that support them, know it. On Thursday, they came to terms with the fact that, in the end, when it's time to count votes, they just don't have enough to win.

By Byron York. Reprinted with permission from National Review Online