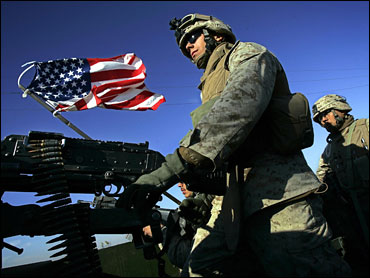 
On Wednesday, President Bush will make a major television speech about the U.S. presence in Iraq. It comes on the heels of a demand by Rep. John Murtha, D-Pa., to get our troops out of Iraq, as well as rumblings from other members of Congress and Iraqi leaders, about having a clear plan and timetable for withdrawal. The administration evidently feels sufficient pressure to take its message on Iraq directly to the American people, and indeed the world.

Those who expect the President to announce a timetable for withdrawing troops will be sorely disappointed. He won't do that. Neither will he clearly state the conditions for withdrawing our troops, as more and more members of Congress are demanding. He will certainly address the December 15 elections in Iraq and tout them as another milestone that will be reached successfully in Iraq's march to independence and self-sufficiency. But that is not enough.

The conditions for withdrawing our troops revolve around our training and combat testing of the Iraqi armed forces to secure the country and guarantee that their nation's fledging democracy will not crumble. The President will remind us that our commanders in Iraq will assess when the Iraqi armed forces are sufficiently trained to handle the security and police missions without our help.

Our commanders lead the best trained, finest fighting forces in the world. If they attempt to train the Iraqis to the same standard, the mission will never be accomplished. The most difficult job for them will be to set a standard for the Iraqis that will guarantee the Iraqi armed forces can relieve us of our combat and security duties and remain viable for the foreseeable future. No American commander will be cavalier about such an assignment. Instead, the tendency will be to adopt a conservative approach to be absolutely certain a positive evaluation of Iraqi training and readiness will not be premature. We can not afford to make that kind of mistake; watch two years of costly work result in a disaster and see a country quickly reduced to anarchy.

So, where do we stand on preparing the Iraqi armed forces to take our place? Despite the heroic efforts of our troops to get them ready, we are a long way from success. We can train tens of thousands of Iraqi soldiers to an appropriate level of proficiency by the 2006 elections. Sadly, in the same time frame, we can not train the officers and non-commissioned officers to the same standard. Such training requires years of maturation to have a positive and lasting effect on any military force. The leadership so necessary to keep an army intact and performing at an acceptable level simply won't be there for many years to come.

Unwilling to compromise their standards and declare the Iraqi armed forces ready, American commanders will feel intense pressure from the administration and may even be forced to make the call too early. This conjures unsettling parallels to the Vietnam War. As our country approaches the 2006 elections, and the distinctly military assessment of Iraqi readiness becomes a political hot potato, the Iraqis will need a lot of luck and a lot of help to survive the ensuing chaos.