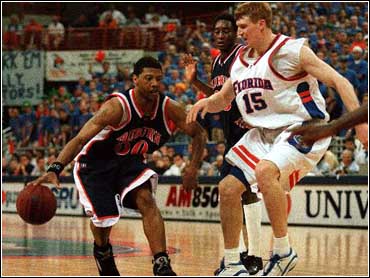 Cliff Ellis had his face buried in his hands. Billy Donovan had his arms around Ellis.

Two coaches who have done a model job of rebuilding their programs in a short time stopped just long enough to embrace and talk about the opposite directions their teams seem to be headed, especially after what happened Sunday.

The Tigers (21-6, 9-5) can't think much about titles after suspending their best player, Chris Porter, while the school investigates his possible dealings with a sports agent.

Porter was the team's leading scorer and the glue that helped Ellis revive the program. For at least one game maybe more the glue was stuck at home, his future unclear.

"It happened late last night and it has hit me hard," Ellis said. "I don't know all the facts yet. He's back at home answering questions. It's been a tough several hours for all of us. We need to get to bottom of it for him."

And for the sake of the team.

Hobbled with knee injuries, both starting center Mamadou N'diaye and starting forward Daymeon Fishback were forced to come off the bench. N'diaye had six points and eight rebounds, Fishback had seven points and neither was effective.

"They probably shouldn't have played, but given the situation, they made a point of playing," Ellis said.

Starting in their place were Jamison Brewer, who scored one point in 30 minutes, and Abe Smith, a seldom-used center whose biggest claim to fame was singing the national anthem at a home game last year.

"We were put in a tough situation," Ellis said. "We're not a healthy ballclub to begi with. With the armor that we had, I thought we did the best we could under the circumstances."

Freshman Donnell Harvey led Florida with 15 points and 12 rebounds. Another freshman, Brett Nelson, had 14 points. The Gators took a one-game lead over Kentucky and Tennessee in the SEC East and put themselves in position to win the conference for the first time since 1989.

The O'Connell Center crowd of 12,457 sensed that, chanting "SEC, SEC, SEC," as the game wound down and the blowout got worse.

Earlier, the Rowdy Reptiles had showered Auburn with "Where's Porter? Where's Porter?" for the missing preseason All-America who led the team to its first NCAA tournament in 11 seasons last year.

"I found out about it a half an hour before I met with the team," Donovan said. "It concerned me. I've been in the situation before as a player and a coach. When a key player is missing, the team often rallies and plays well."

Indeed, Auburn kept the pace at a reasonable level and actually drew within eight points early in the second half behind hot shooting streaks from the only healthy starters, guards Doc Robinson and Scott Pohlman.

But any comeback hopes ended when Nelson and Kenyan Weaks hit four 3-pointers during a 14-2 run that gave Florida a 20-point lead.

Brent Wright and Mike Miller each had 13 points for Florida, which shot 6-for-7 from 3-point range in the second half to blow open the game.

Thanks to his late burst, Robinson finished with 21 points. Pohlman overcame an 0-for-6 first half to finish with 12. Another emergency starter, Mack McGadney, had four points on 2-for-12 shooting.

"The luck isn't going our way right now," Pohlman said. "We just have to keep fighting through it, try to get the ball rolling again and get our confidence back."

Ellis headed home seemingly as mystified as anyone both over Porter's future and the future of his team.

"I think if we can get our health back, we can still be a factor," Ellis said. "But I've got to get a healthy team. I've got some banged-up guys."