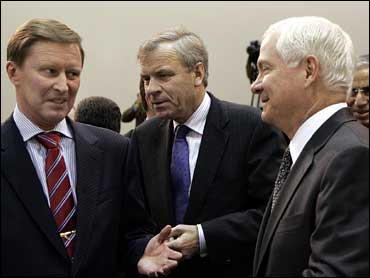 Serial numbers and markings on explosives used in Iraq provide "pretty good" evidence that Iranians are providing either weapons or technology for militants there, Defense Secretary Robert Gates asserted Friday.

Gates' comments made official the Iran weapons connection first reported by CBS News at the end of January, when officials told national security correspondent David Martin that serial numbers on parts used to make advanced explosive devices, powerful enough to breach the armor on an American tank, had been traced directly back to Iran.

Offering some of the first public details of evidence the military has collected, Gates said, "I think there's some serial numbers, there may be some markings on some of the projectile fragments that we found," that point to Iran.

At the same time, however, he said he was somewhat surprised that recent raids by coalition and Iraqi forces in Iraq swept up some Iranians.

Just last week, Gates said that U.S. military officers in Baghdad were planning to brief reporters on what is known about Iranian involvement in Iraq but that he and other senior administration officials had intervened to delay the briefing in order to assure that the information provided was accurate.

He and other U.S. officials have said for some time that Iranians, and possibly the government of Iran, have been providing weapons technology, and possibly some explosives to Iraqi insurgents.

But, Bernie Kaussler, an associate fellow at the University of St. Andrews' Institute for Iranian Studies, tells CBSNews.com that he's not convinced top Iranian officials are involved in weapons smuggling.

"There are so many players in Iranian politics, many times the left hand doesn't know what the right hand is doing. That might well be the case," he explains. "It is possible that there are a few hotheads supplying weapons and support without the central government knowing."

The improvised explosive devices (IEDs) have been a leading killer of U.S. forces in Iraq, where more than 3,000 servicemen and women have died in the nearly four-year-old war.

Iranian President Mahmoud Ahmadinejad has denied his government is supporting Iraq's militias with money or weapons.

The IEDs have been a leading killer of U.S. forces in Iraq, where more than 3,000 servicemen and women have died in the nearly four-year-old war.

Gates, who is attending his first NATO defense ministers meeting, said Iran is "very much involved in providing either the technology or the weapons themselves for these explosively formed projectiles. Now they don't represent a big percentage of the IED attacks but they're extremely lethal."

Gates said the raids combined with the movement of an additional U.S. aircraft carrier into the Persian Gulf have created a stir, but said the Bush administration has no intention of attacking Iran.