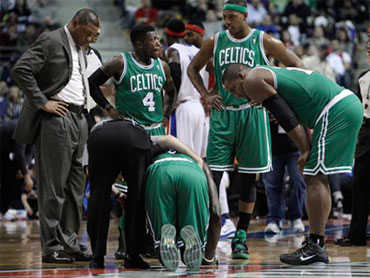 Kevin Garnett threw down an emphatic dunk, then grimaced before he even landed.

With that, Boston's smooth run through this NBA season came to an end.

Garnett left in the first quarter with a leg injury, and the Celtics looked ragged without him in a 104-92 loss to the Detroit Pistons on Wednesday night. Boston lost for only the second time in 17 games, but the Celtics are suddenly facing some adversity they hope isn't too serious.

"It is a muscle injury, not a knee," Boston coach Doc Rivers said. "You always worry when a guy goes down without anyone around him, because those always seem to be severe injuries, so that was the first thing that went through my mind. We don't think this one is too bad, but we'll see. He'll probably miss some time, and we'll have to adjust."

Tracy McGrady - himself no stranger to leg problems - scored a season-high 21 points for the Pistons. He also played over 30 minutes for the first time since March.

"I've been making progress," McGrady said. "I've been confident mentally, physically for quite some time now. I'm just continuing to get better because I work. I see the improvement that I'm making on the court and I'm going to continue to do that. I'm excited about my future."

Detroit led 45-37 at halftime and pushed the margin to 16 in the third quarter.

Boston played without point guard Rajon Rondo, who missed his sixth straight game with a sprained left ankle. The Celtics have been able to win without him, but it was a struggle from the start against the Pistons.

When Garnett dunked for his only two points of the game, he had a pained look on his face before he landed and was careful to avoid putting too much weight on his right leg.

After intentionally fouling to stop the game, he went down to the ground momentarily and appeared distraught when he got up, at one point covering his face with his hands. He was able to hobble off the court but was limping badly by the time he got back to the locker room.

X-rays revealed no fracture, but he was done for the night and possibly longer.

"I think Kevin's injury took a lot of wind out of our players, because we originally thought the injury was a lot more severe than it turned out to be," Rivers said. "I think there was a while there where our minds weren't where we needed them to be."

Garnett had surgery on his right knee in May 2009 after missing all of that year's playoffs.

This game was much anticipated because of Garnett's dustup with Detroit's Charlie Villanueva earlier in the season. After a Nov. 2 loss to the Celtics, Villanueva complained on Twitter that Garnett had called him a "cancer patient" during Boston's 109-86 win. Garnett denied that, saying he had actually called Villanueva: "cancerous to your team and our league."

Villanueva insisted Wednesday he wasn't fixated on that feud. He picked up two quick fouls early, the second when he and Garnett appeared to bump each other gratuitously. Villanueva then headed to the bench.

"It was very frustrating," Villanueva said. "Sometimes I let my emotions get the best of me."

Garnett's injury eventually put a stop to that chippy matchup. Villanueva went scoreless in the first half, but contributed 11 points in the third quarter and finished with 14.

Paul Pierce scored 33 points for the Celtics, but he was fighting a losing battle on this night.

Down 12, Boston began the fourth quarter with a lineup of Pierce, Jermaine O'Neal, Marquis Daniels, Von Wafer and Luke Harangody - not exactly the lineup the Celtics hope will take them back to the finals for the third time in four seasons.

Rivers was called for a technical foul early in the fourth, and a basket inside by Greg Monroe gave Detroit a 77-62 lead. The Pistons maintained a comfortable advantage the rest of the way.

Garnett's injury in 2009 hurt Boston's attempt to win a second straight title that year. He had injured the knee going up for an alley-oop in a game against Utah, then aggravated the injury later in the season.

"I was worried, because I saw the play in Utah where he got hurt the first time, and this looked exactly the same," O'Neal said. "I know it took him a long time to come back from that one, so it is good that it sounds like this is something different. I know from experience how bad it is to try to get back from leg injuries."

Notes: Pistons G Rodney Stuckey missed the game because of a stomach virus. McGrady started in his place. ... Detroit shot 55.7 percent from the field. ... The Celtics turned the ball over 21 times, including six by Ray Allen and five by Pierce.