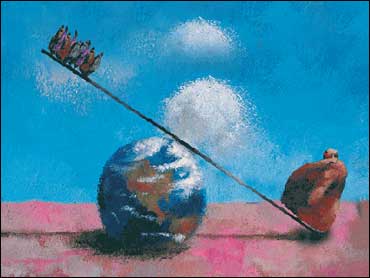 The gap between rich and poor is getting bigger in the world's richest countries - and particularly the United States - as top earners' incomes soar while others' stagnate, according to a 30-nation report released Tuesday.

In a 20-year study of its member countries, the Paris-based Organization for Economic Cooperation and Development said wealthy households are not only widening the gap with the poor, but in countries such as the U.S., Canada and Germany they are also leaving middle-income earners further behind, with potentially ominous consequences if the global financial crisis sparks a long recession.

Inequality threatens the "American Dream" of social mobility - children doing better than their parents, the poor improving their lot through hard work - which is lower in the U.S. than countries such as Denmark, Sweden and Australia, the report "Growing Unequal? Income Distribution and Poverty in OECD Countries" found.

The two decades covered in the study - 1985-2005 - saw the development of global trade and the Internet, and a period of overall strong economic growth. The countries covered are mostly developed nations, especially in Europe.

The United States has the highest inequality and poverty in the OECD after Mexico and Turkey, and the gap has increased rapidly since 2000, the report said. France, meanwhile, has seen inequalities fall in the past 20 years as poorer workers are better paid.

OECD Secretary-General Angel Gurria said that the study, which took three years to complete, would be useful to policymakers because it is coming out just as the world is undergoing "the worst crisis in decades."

With several OECD countries already in recession, the "key question" raised by the report is whether governments can prevent a possible drop in top earners' incomes from sparking "a second wave" hit to the lowest-income households, Martin Hirsch, France's high commissioner for fighting poverty, said at a news conference.

Also speaking at the report's presentation, Oxford University economist Anthony Atkinson noted that the widening inequality gap had coincided with a period of strong economic growth.

"What will happen if the next decade is not one of world growth but of world recession? If a rising tide didn't lift all boats, how will they be affected by an ebbing tide?" Atkinson said.

With governments around the globe announcing trillions of dollars in rescue financing to shore up banks, "I think that citizens of OECD countries are going to expect that if you can find funds to rescue banks, then governments can fund an effective unemployment insurance scheme, and they can fund employment subsidies," Atkinson said.

Atkinson said governments need to act to support employment as a response to widening inequality and faltering economies.

The OECD's Gurria urged governments to address the "divisive" issue of growing inequality. He said they should do more to educate the whole work force - and not just the elite - while helping people get jobs and increasing incomes for working families, rather than relying on social benefits.

"Greater income inequality stifles upward mobility between generations, making it harder for talented and hardworking people to get the rewards they deserve," he said in a statement. "It polarizes societies, it divides regions within countries, and it carves up the world between rich and poor."

Social mobility is lowest in countries with high inequality such as the United States, United Kingdom, and Italy, the report said.