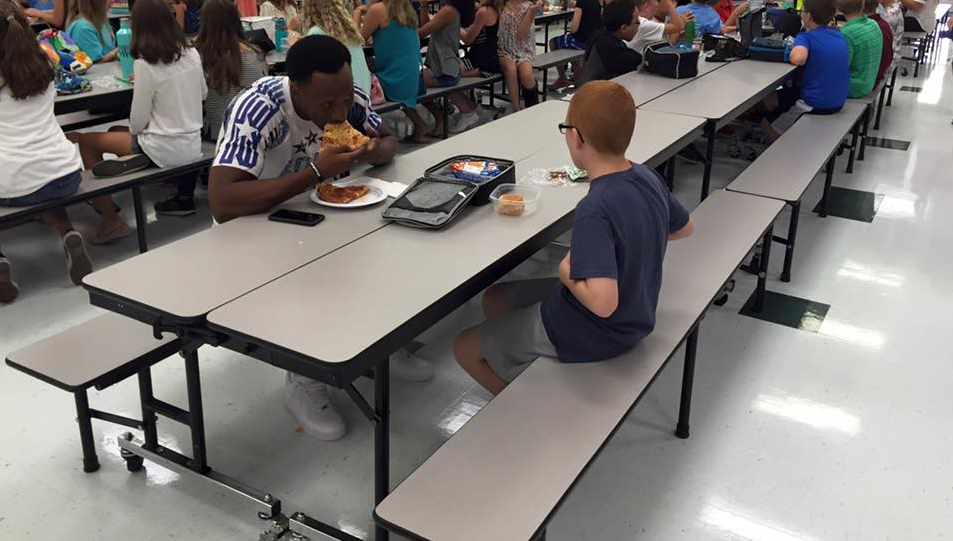 Nearly a year ago, sixth-grader Bo Paske's life was changed when Florida State wide receiver Travis Rudolph took a seat at his otherwise empty table in the school cafeteria.

The story went viral, and the college football star was praised for his kindness to the boy with autism. Afterward, the internet couldn't help but root for Rudolph's success both on and off the field — Bo's mom included.

And the well wishes continued this weekend, as Rudolph anxiously awaited the 2017 NFL draft.

The Florida State junior didn't end up getting selected in the draft, but he did reportedly sign an undrafted free agent contract with the New York Giants, CBSSports.com reports.

Rudolph's social media accounts were flooded with praise over the weekend.

The college football star made national headlines when he sat down across from Bo to eat a slice of pizza in August. Rudolph and several other FSU players were visiting Montford Middle School in Tallahassee when the wide receiver spotted the middle schooler sitting at a large table by himself.

"He doesn't seem to mind if he eats lunch alone. It's one of my daily questions for him," Leah Paske, Bo's mom, explained in a Facebook post that has been shared more than 15,000 times. "Was there a time today you felt sad? Who did you eat lunch with today? Sometimes the answer is a classmate, but most days it's nobody."

Rudolph didn't know that this small decision would make such a big impact on the boy and his mother.

The college junior told CBS affiliate WCTV that when he read Paske's Facebook post, it nearly brought tears to his eyes.

"[Bo's] a cool person, I'll hang out with him any day. And for the mom, if he needs my (cell) number, he can get it," Rudolph told WCTV sports anchor Kenny Morales.

On Saturday, they reunited to celebrate draft day.

"Blessed to be able to spend the weekend with family! #numberonefans#celebratethewins #lovealwayswins #gogiants," Paske posted on Facebook Monday afternoon.

Rudolph said he appreciates the support from — especially at this time, because his family just suffered through a shocking tragedy.

"It's a blessing," Rudolph told WPEC CBS 12. "My family is very strong and tight, and we lift each other up when we're down, and we fight through all the trials and tribulations."

"He's always been with me the whole way," he said.