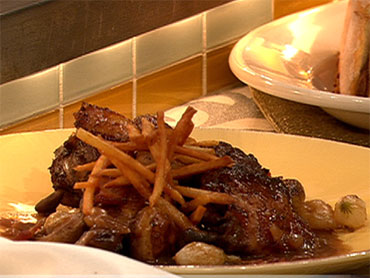 If you really want to "wow" your dinner guests over the holidays, how about cooking some French cuisine?

Clotilde Dusoulier, editor of the English version of "I Know How to Cook," a staple for French chefs for over 75 years, shared how to create a traditional French holiday menu for your table.

Do not worry if you can't find scallops with their shells, without will do just as well and will taste just as good. In France, scallops are often cooked in their shells, and they can be found that way at finer grocery stores such as Kings, Whole Foods or Fresh Direct.

If you don't want to do all of this, simply prepare the butter as the recipe calls for and roast the shelled scallops in terrines.

Preheat the oven to 350 degrees. Mix the butter with the chives, hazelnuts, bread crumbs and lemon juice. Season with pepper. Using plastic wrap or wax paper, shape the butter into a roll and refrigerate. Shuck and clean the sea scallops, and scrub and blanch the shells in boiling water for five minutes. Return the sea scallop meat to the shells and divide the hazelnut butter between them, then roast in the oven for 5 minutes, or until just cooked through.

Meanwhile, divide the rock salt between 4 serving plates to form a bed of salt, which will stabilize the shells. Remove the sea scallops from the oven, and place the sells on the beds of sea salt. Season with sea salt and pepper and serve.

Coq Au Vin is a French braise of wine, lardons, mushrooms and optionally garlic. It has been around for some time-some legends trace it back to Gaul and Julius Caeser. But the first recorded Coq Au Vin recipe can be traced back to the 20th Century. Coq is French for rooster, although the recipe calls for chicken or a younger Capon.

Prepare the day before serving. Heat the oil and 3 1/2 tablespoons of the butter in a heavy pan, add the capon or chicken pieces and the onion and cook over medium high heat until browned on all sides. Sprinkle with the flour and continue to cook, stirring. Remove from the heat, pour in the cognac and simmer vigorously to evaporate the alcohol. Pour in the wine, season with salt and pepper and add the garlic. Cook for 1 hour, let cool and store in the refrigerator until the next day.

Terrine is a glazed earthenware (terracotta, French terre cuite) cooking dish with vertical sides and a tightly fitting lid, generally rectangular or oval. Modern versions are also made of enameled cast-iron. Terrine may also easily be confused with tureen, a large, deep, and usually round or oval covered dish, used for serving soups or stews.

In this case, these chilled desserts that are turned out are prepared in a terrine, hence the name.

Prepare the day before. Whisk the egg yolks with sugar until the mixture becomes thick, white and creamy. Melt the chocolate with very little water in a heatproof bowl, set over a pan of barely simmering water, and stir in the eggs. Beat the butter to soften it and add to the egg and chocolate mixture. Mix the chestnut puree, a little at a time, into the mixture. Finally stir in the crème fraiche and the Kirsch.

Arrange the ladyfingers in a loaf pan, covering the base and standing them upright to line the sides. Spoon in a layer of the chestnut chocolate mixture. Add a layer of the lady fingers and add another layer of the mixture. Finish with a layer of ladyfingers. Cover the ladyfingers with aluminum foil and press down with a few weights. Refrigerate for 12 hours. Turn out. Serve the terrine as it is, or coated with light caramel. You can also try crème anglaise or rum sauce.