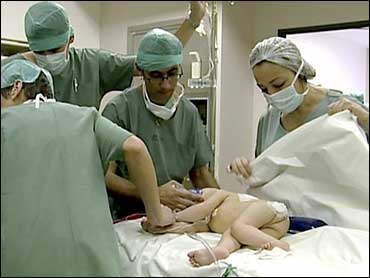 French doctors have successfully separated twins joined at the spine, the first operation of its kind in France, hospital officials said.

Fifteen-month-olds named Mohamed and Souleymane were successfully separated on Dec. 15. Similar operations have previously been performed in Britain, South Africa and Canada, the surgeons said Wednesday.

"As soon as they woke up on the operating table, the twins moved their legs and their feet. Today, their prognosis is good," said doctor Gabriel Lena, head of the pediatric neurosurgery division of the La Timone hospital.

The twins were born prematurely at 26 weeks, weighing just 1.7 pounds each and fused at the base of the spine. Diagnosed as conjoined twins before birth, they were kept in hospital until they were old enough to be operated on.

The main risks of the operation were paralysis of the lower limbs or infection leading to a potentially deadly meningitis.

Surgeons said they made sure they had enough skin to cover the wound left by the operation by inserting inflatable balloons under the twins' skin five weeks before the operation.

Mohamed and Souleymane were recovering together and should have normal childhoods, doctors predicted. Their parents wished to remain anonymous.