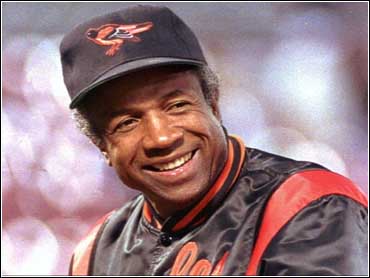 Hall of Famer Frank Robinson was hired as baseball's dean of discipline Friday and will be responsible for deciding suspensions for on-field conduct.

Robinson's hiring as vice president of on-field operations follows the abolition of the American and National league offices and the league presidents, who had handled discipline for more than a century.

Robinson, the only player to win Most Valuable Player awards in both leagues, had been a consultant to commissioner Bud Selig for special projects and head of the Arizona Fall League. Robinson, who became baseball's first black manager when Cleveland hired him in 1975, turned down the change to become a coach for new Chicago Cubs manager Don Baylor.

"Frank Robinson is a baseball legend who brings invaluable experience both as a player and executive to the central officer," Selig said. "Frank knows and understands the game from every conceivable angle and is the perfect choice to handle player discipline and other on-field matters."

Robinson also will be in charge of speeding up games, policies on uniforms and stadium configuration. He will report to Sandy Alderson, executive vice president of baseball operations in the commissioner's office.

The other executive VPs are Bob DuPuy, who is baseball's top lawyer and Selig's closest confidante, and Rob Manfred, who is in charge of labor relations.

Solomon, who reports to Alderson, will continue to oversee minor league operations and also will be responsible for the Arizona Fall League and the Major League Baseball Scouting Bureau.

Melendez, who had been a labor lawyer with the commissioner's office since 1983, was made vice president of international baseball operations and will report to Solomon. He will be responsible for international signings and on-field international matters.