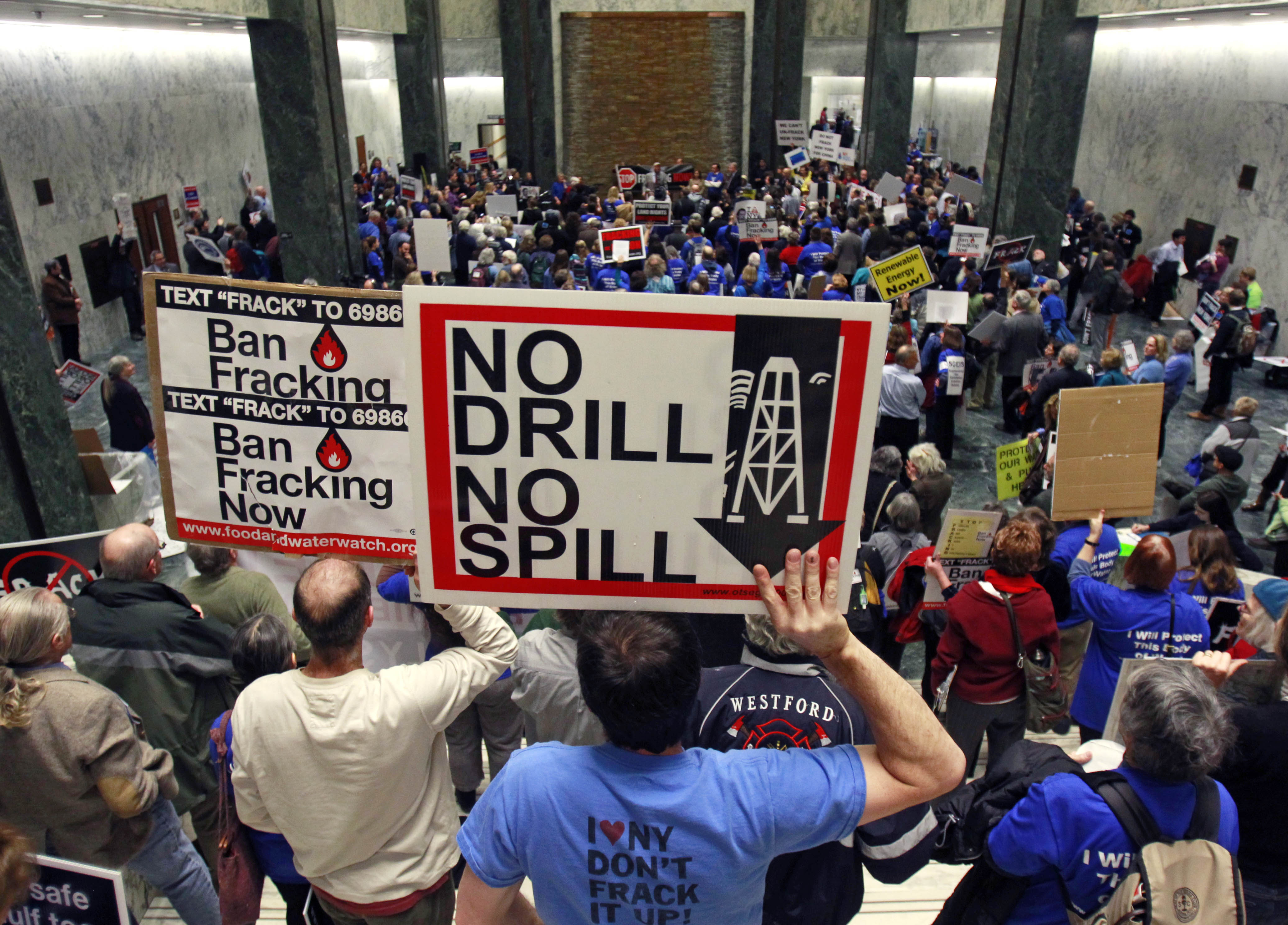 New York has had a temporary ban on the practice since an environmental review began in 2008.

State Environmental Commissioner Joe Martens said Wednesday that he was recommending a total ban, and Cuomo said he would defer to Martens and Acting Health Commissioner Howard Zucker in making the decision.

Zucker and Martens summarized the findings of their environmental and health reviews. They concluded that shale gas development using high-volume hydraulic fracturing, or fracking, carried unacceptable risks that haven't been sufficiently studied.

Martens said the Department of Environmental Conservation will put out a final environmental impact statement early next year, and after that he'll issue an order prohibiting fracking.

The gas drilling boom in the Marcellus Shale, a rock formation underlying southern New York, Pennsylvania, Ohio and West Virginia, was made possible by fracking, which releases gas from rock by injecting wells with chemically treated water at high pressure.

The drilling technique has generated tens of billions of dollars and reduced energy bills and fuel imports in the region. But it's also brought concerns and sparked protests over air and water pollution, earthquakes, property devaluation, heavy truck traffic and health impacts.

Zucker said he had identified "significant public health risks" and "red flag" health issues that require long-term studies before fracking can be called safe. He likened fracking to secondhand smoke, which wasn't fully understood as a health risk until many years of scientific study had been done.

Martens noted the low price of natural gas, the high local cost of industry oversight and the large areas that would be off-limits to shale gas development because of setback requirements, water supply protections, and local prohibitions. He said those factors combine to make fracking less economically beneficial than had been anticipated.

Martens said the Department of Environmental Conservation will put out a final environmental impact statement early next year, and after that he'll issue an order prohibiting fracking.

Cuomo said the debate over fracking was the "most emotional" he has had to deal with as governor, topping even such hot-button issues as same-sex marriage and gun control. He said the issue led to some heated encounters with people on both sides of the debate. Within 30 seconds of talking about fracking with opponents, tempers typically flared, Cuomo said.

Zucker said after studying all the analysis, for him it came down to one question: Would he want to live in a community that allows fracking? "My answer is, no," he said.

"We can't afford to make a mistake," Zucker said. "The potential dangers are too great."

Cuomo referred to Wednesday's presentation by his agency chiefs as "very factual," but said he's anticipating lawsuits being filed "every which way from Sunday" in an attempt to overturn the DEC's decision to ban fracking.

"Do I believe the facts will trump all emotion? No," Cuomo said.

The oil and gas industry said Cuomo acted "irresponsibly" in making his recommendation and was putting the state's economy on a "reckless path and ignoring the needs of New York families."

"Robust regulations exist at the federal and state levels nationwide for natural gas development and environmental protection," she said. "A politically motivated and equally misinformed ban on a proven technology used for over 60 years - throughout the country to great success - is short-sighted and reckless, particularly when New York depends on safely produced natural gas just over the border in Pennsylvania."