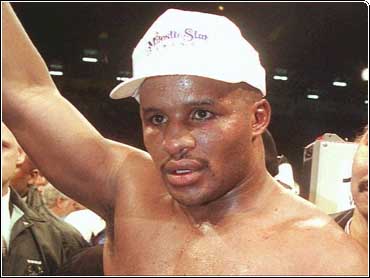 Michael Moorer's grandfather is suing the former heavyweight champ for up to $6.9 million, claiming he didn't get what he deserved for guiding the boxer's amateur career as a trainer.

At issue at the trial in federal court are contracts signed in 1986 and 1988. Under the first contract, Moorer was to give Henry Smith a quarter of his lifetime earnings; the second called for 10 percent while Smith worked for Moorer.

The boxer's lawyers say the grandfather, now 79, was kept on as a favor after Moorer went pro in 1988. They say Smith gave advice that was mostly ignored and repeatedly bothered Moorer and his manager, John Davimos, for money.

Smith, who uses a wheelchair and does not speak clearly enough to testify before jurors, was fired in 1992.

"I asked Michael for money almost every day because he owed me. He didn't do me right," he said in a deposition read in court Tuesday, the first day of the trial.

Moorer, a native of Monessen in southwestern Pennsylvania, beat Evander Holyfield for the IBF and WBA titles in 1994 but was knocked out by George Foreman later that year.

Moorer has not fought since 1997 and his lawyer, Richard Dandrea, said he's planning a comeback for next year.

Smith, a former amateur boxer, persuaded an 18-year-old Moorer to sign a deal in 1986 that obligated him to hand over one-quarter of his lifetime earnings.

Moorer's aunt, Marsha Jones, testified she saw Moorer sign the deal. But Dandrea suggested no one was present to look out for Moorer's interests.

Smith's lawyers say he was told by Moorer's managers in 1992 that he was being fired but would be "taken care of." U.S. District Judge William Standish ruled those statements were not an enforceable contract.

A separate 1988 contract with Davimos had called for Smith to be paid 10 percent of Moorer's earnings. But Smith says Moorer is still bound by the 1986 contract.

Smith began training Moorer as a boxer when the boy was 12. He drove Moorer to bouts in Weirton, W.Va., and put him through workouts nightly at a gym, Jones testified.

But the family ties began to fray after Moorer signed with managers from Detroit. Smith said security guards kept him out of Moorer's corner and dressing rooms at some fights.

He said Moorer's management company, JEB Enterprises Inc., paid for his trips to fights where he bandaged Moorer's hands, put on his gloves and changed his water bucket. He also claimed he helped Moorer beat Holyfield.

"My dad taught him so many tricks," said Smith's son, Vaughn, who also was a boxer. "He used one of them against Holyfield. If you get your back against the ropes, the first thing you do is spin your oponent around, so he would be off balance."

"This is an unfair attempt to take advantage of a grandson's kindness," Dandrea told jurors.

Americans have been thrust to the forefront of the global pandemic, with at least 32 states telling all but essential workers to stay at home.