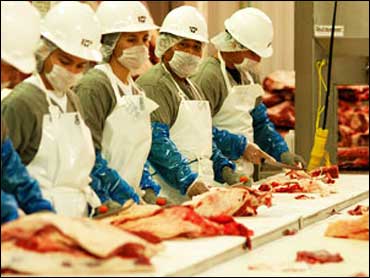 Those of us who enjoy a thick, juicy steak know full well how it got to our plate. We know that at some point in time, a cow was fed, then slaughtered, and finally shipped to our local grocer or restaurant. But how often do we think about the process by which that cow is turned into a steak or ground beef?

Eric Schlosser thinks the answer is, not often enough.

The author of the 2001 bestseller Fast Food Nation: The Dark Side of the All-American Meal not only visited a meatpacking plant, but also toured the infamous killing floor:

I see: a man reach inside cattle and pull out their kidneys with his bare hands, then drop the kidneys down a metal chute, over and over again, as each animal passes by him; a stainless steel rack of tongues; Whizzards peeling meat off decapitated heads .... We wade through blood that's ankle deep and that pours down drains into huge vats below us. As we approach the start of the line, for the first time I hear the steady pop, pop, pop of live animals being stunned."

As difficult as that may be to read, watching it in a movie theater is worse. The film version of "Fast Food Nation," which opens today, is a slightly fictionalized version of Schlosser's exposé. The fast-food company with questionable health standards is called Mickey's. The meatpacking giant that treats its employees as bad as the cattle is UMP (in the book, Schlosser goes after IBP and ConAgra among others). And the aim of the movie is no less direct than the book's: To shock Americans into no longer patronizing fast food restaurants, not only for health reasons but also because of their impact on the environment, animals, workers and the economy.

In fact, at the movie's end, the audience is urged to visit www.participate.net to get involved. (The site also promotes such conscientious fare as "An Inconvenient Truth" and "North Country.")

Considering the sprawling nature of Schlosser's book, it's no surprise the movie struggles with cohesion — despite a competent cast which includes Greg Kinnear, Ashley Johnson, Wilmer Valderrama, and the always likeable Luis Guzman. The film is also studded with cameos by Bruce Willis, Kris Kristofferson, Ethan Hawke, and others.

Director Richard Linklater focuses primarily on three areas: the plight of illegal aliens working in "the most dangerous job" (Schlosser's words) in America; the fast food executive who discovers "there is s--- in the meat," and the high schooler trying to earn enough for college by working behind the counter at Mickey's.

Inevitably, too much time is spent on Amber (Ashley Johnson), the girl behind the counter, who must decide what to do with her life and is urged by her uncle (Ethan Hawke, looking as though he hasn't bathed since "Training Day") to go out and make a difference in the world. Her exploits as an "ecoterrorist" are laughable, though perhaps intentionally so. Amber's cohorts include a student radical who says, "Right now I can't think of anything more patriotic than violating the Patriot Act!" Halfway into the film, Greg Kinnear's character, the executive from Mickey's, simply vanishes until the closing credits.

Nevertheless, the scenes involving the illegal workers at UMP, who do everything from hosing down the killing floor to pulling out the organs, are chilling. One worker's near-death experience is particularly graphic (though the book contains much worse).

Schlosser's Fast Food Nation is a modern-day The Jungle, with the immigrants coming from south of the border and not Lithuania. Both works intend to move Americans to demand better treatment of man and animal. But following the publication of Upton Sinclair's novel in 1906, the first piece of legislation that resulted was the Pure Food and Drug Act, which had less to do with workers' rights than the quality of our meat products. Sinclair was quoted as saying, "I aimed at the public's heart and by accident I hit it in the stomach." Meat consumption has only gone up since then, and "Fast Food Nation" (both the movie and the book) will probably not slow it down.

This isn't to say, however, that the industry will not change. As The New York Times recently reported, companies such as D'Agostino's already sell meat with labels saying "certified humane," and Whole Foods Market will soon follow with its own "animal compassionate" stickers. That way we can sleep at night knowing the cows were not mistreated (except for that steel bolt at the end).

The film "Fast Food Nation" has an important message to send to the audience. The problem is, what sort of audience is willing to pay money to see a cow's throat slit and buckets of blood gush out?

In fact, we should have already gotten the message from the educational film on "The Simpsons" entitled "The Meat Council Presents: Meat and You: Partners in Freedom." In it, Troy McClure — you might remember him from such driver's ed films as "Alice's Adventures through the Windshield Glass" and "The Decapitation of Larry Leadfoot" — explains to little Jimmy how "it all starts here, in the high density feedlot. Then, when the cattle are just right ... it's time for them to graduate from Bovine University." Troy then takes Jimmy through the killing floor but assures the young boy the term is misleading: "It's not really a floor, it's more of a steel grating that allows material to sluice through so it can be collected and exported." That sounds about right.
By Victorino Matus
By Victorino Matus
©