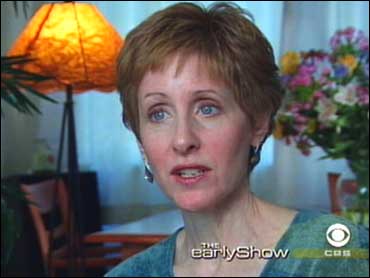 In the year 2002, thousands of babies were adopted by American parents from foreign countries including China, Russia, Guatemala, South Korea and the Ukraine.

Foreign adoption is a growing trend in the adoption community, and it's particularly popular among singles who want children.

The Early Show's Debbye Turner sat down with one woman, in Pacifica, Calif., who reached into her heart and then reached overseas to find a son and fulfill her life long dream of motherhood.

Everyday for the last year, Allison West has stopped at a PS store in Pacifica, Calif. to take care of some mail, but today, she arrived with a package that she's not letting go of.

Baby Tyler is a new delivery, of sorts.

The joy of motherhood is something she has searched for, for years. After one miscarriage, and two failed marriages, she found herself single at 45, and wanting a baby.

So as a single woman, she decided to adopt. "That was my option," she says, 'it was the only one left. And I wasn't going to let being single get in the way of having my family."

But at first, being single did get in the way of having a family. Not all adoption agencies are single parent friendly.

She says, "I was completely shocked. I thought, they would rather have a kid go to, maybe a bad marriage or a couple who is faking it as they go along and here I am, ready and willing, and able to love a child."

After some research, she found that it would easier, as a single person, to adopt from a foreign country. And there were other benefits to international adoption.

West says, "I had heard so many horror stories of people who had done domestic adoptions. They had like literally up to the door to pick up their baby and then the birthmother changed their mind. And I thought, you know, at 45, I couldn't take that chance. I wanted the sure thing, and once you start looking at international adoption, people start telling you it's not 'if,' it's 'when.'"

West identified a U.S. based agency that handled adoptions in the Eastern European country of Belarus.

She says, "They accepted singles. They have a high caregiver-baby ratio. And the orphanage where my son was from, they had roughly four caregivers for about ten kids. Plus pediatricians run the orphanage. So all those factors, I took into account and decided to go with Belarus."

West first saw pictures of her future son over the Internet. He was 9 months old and his name was "Ivars." After a year long process, she traveled to his homeland to unite them as mother and son.

Showing a photo of the moment she and Tyler were first introduced, West says it was an incredibly special day. "All of a sudden the nurse walks in holding this baby and I look up and that's my baby and I just couldn't believe it," she recalls.

"We just left the orphanage and we said goodbye to everyone," she adds, "I have my sleepy boy here. He is very tired. I'm hoping he'll fall asleep in my arms."

After a few long days of doctors' appointments, hotel stays, and more paperwork, mother and son flew back to U.S. soil, where friends and family welcomed them.

A home video shows West saying to the camera, "What do I have to say? I am in love with my boy and I think he loves me, just look at how he holds my hand. I'm so happy to be home. (Choked up, she mouths: I'm thrilled.)

It's been a couple months now, and Tyler has become a true American. He loves Cheerios and he's already had his first trip to Supercuts. It's been a celebration of firsts.

West says, "It was a real milestone to say, I was with him on his first birthday."

She has made Tyler's Russian name, Ivars, his middle name, and she intends to teach him all she can about where he came from.

Showing a Russian rattle to her son, West says, "This is a marushka, which is made in Russia. And it's their traditional kind of decorative piece."

The biggest challenge for this single mom will be balancing her career, as a self employed lawyer, with the demands of motherhood and trusting her instincts.

She explains, "Oh, my gosh. He's screaming, like, do I need to call someone? I don't have a partner to run it by. Like, is this normal? So, I call my mother a lot."

And if she has any more questions, she can ask the adoption agency. They will be conducting "home studies" for another three years on she and Tyler.

West says, "It's Belarussian policy. They want to make sure everything is ok. They are very strict about that."

But this team of two won't have trouble convincing anyone that they're meant to be.

West only regret is that she didn't do it sooner. She says, "They say in the adoption community, you get the child you were meant to have. He is every second of every day, my child. I have no doubt about that."

The following is information from the National Adoption Information Clearinghouse (NAIC):

Most singles are adopting through international adoption

What research has been conducted?

Groze, V.K. and Rosenthal, J.A. (1991). Single parents and their adopted children: a psychosocial analysis. The Journal of Contemporary Human Services, 130-139.