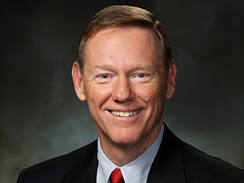 It was the company's third straight year of profitability despite rising commodity costs and charges for a big expansion in Asia.

Mulally earned $2 million in salary, up 43 percent from 2010, and stock awards valued at $13.9 million, up 86 percent from the prior year. But his performance bonus dropped 42 percent to $1.8 million because Ford fell short of market share and quality targets in some areas.

Ford's U.S. quality ratings were tarnished last year by glitches in its touch-screen dashboard systems and shifting problems in some automatic transmissions. And while it gained market share in Europe, its share was flat in other markets.

Mulally also received $612,587 in perks and other compensation for things like the use of a private jet, a personal car and driver and security.

The pay package was Mulally's highest since 2006, when he was hired to turn around the company. Mulally made $39.1 million that year thanks to a performance bonus and compensation for leaving his former employer, Boeing Co.

Mulally's pay - which put him among the highest-paid CEOs in the U.S. last year when he made $26.5 million - has angered some Ford factory workers. United Auto Workers President Bob King has called his compensation level "morally wrong." But Ford says Mulally's pay is fair, pointing out that a majority of his compensation is tied to the success of Ford's shares.

Mulally defended his pay in an interview last fall with The Associated Press, saying it is entirely tied to the success of Ford: "The vast majority of my compensation is at risk, because the numbers that you see are only realizable if we profitably grow the corporation. And that's the way it should be."

Ford Motor Co. reported last year's compensation for Mulally and company Chairman Bill Ford on Friday in a filing with the federal government.

Bill Ford, who stepped down as CEO when he hired Mulally, saw his compensation drop 55 percent to $11.3 million in 2011. That was partly because his 2010 salary included compensation from prior years that he earned when the company achieved sustained profitability. Bill Ford's performance bonus also dropped 42 percent to $520,000 and his stock awards fell 21 percent to $2.8 million.

Ford spent $1.4 million on perks and other compensation for Bill Ford. Most of that went to private security.

Dearborn-based Ford earned $20.2 billion in 2011, or $4.94 per share. Worldwide sales rose 6.7 percent to nearly 5.7 million cars and trucks, despite sales slowdowns in Europe and China and old products that made it tough for Ford to compete in South America.

In Friday's filing, Ford also announced the company's annual meeting will be held May 10 in Wilmington, Del.

The Associated Press formula for executive compensation calculates an executive's total compensation during the last fiscal year by adding salary, bonuses, perks, above-market interest the company pays on deferred compensation and the estimated value of stock and stock options awarded during the year. The AP formula does not count changes in the present value of pension benefits, which makes the AP total slightly different in most cases from the total reported by companies to the Securities and Exchange Commission.

The value that a company assigned to an executive's stock and option awards for 2011 was the present value of what the company expected the awards to be worth to the executive over time. Companies use one of several formulas to calculate that value. The number is just an estimate and the amount an executive ultimately receives will depend on the performance of the company's stock.

Most stock compensation programs require an executive to wait a set time to receive shares or exercise options.