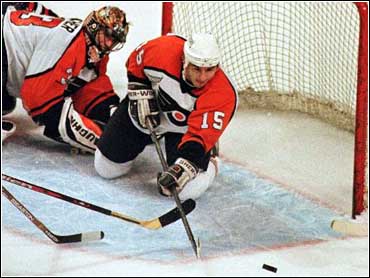 Philadelphia rookie goaltender Brian Boucher is rapidly establishing himself as one of the best goaltenders in the NHL.

Boucher made 22 saves, many of them spectacular, as the Flyers beat Chicago 3-1 on Tuesday.

"This game could have gone either way if it wasn't for Boucher," said teammate John LeClair, who scored his 300th career goal. "He seemed to be making saves left and right the whole night."

Valeri Zelepukin, who also had an assist, and Daymond Langkow also scored for the Flyers, who won their third straight and stretched their unbeaten streak to four.

Tony Amonte scored for the Blackhawks, who are 2-4 in their last six.

Boucher made a number of spectacular saves, especially in the first period. He stopped close shots by Steve Sullivan and Josef Marha, kicked away Amonte's attempt while sliding on the ice and denied Anders Eriksson's followup slap shot.

"There were a couple of pretty good plays where Brian was very quick," said Philadelphia coach Craig Ramsey, who has won two straight games since replacing Roger Neilson, who is out for the rest of the regular season while he battles cancer. "Brian was very alert tonight. He did a great job."

Boucher leads all NHL rookies with a 1.90 goals-against average and is 11-5-3 with one shutout for the season as John Vanbiesbrouck's backup.

LeClair got the Flyers on the board at 12:21 of the first, converting a wrist shot from the slot afte taking a pass from Keith Jones, who played in his 100th NHL game.

LeClair, who leads Philadelphia with 31 goals, got a prolonged standing ovation from the sellout crowd of 19,742 when his milestone was flashed on the scoreboard midway through the third.

"Give LeClair the slot and he'll find the net," Chicago assistant Lorne Molleken said. "We should have tested Boucher more, but he made the key saves when he had to."

Zelepukin made it 2-0 with a fluke goal only 23 seconds into the second. His shot from the far side bounced off the skate of Chicago's Boris Mironov, then hit the left post before rolling into the net.

"The first two goals were frustrating for me," Chicago goalie Jocelyn Thibault said. "I just can't seem to buy a bounce right."

Amonte, who leads the Blackhawks with 30 goals, scored on a power play at 3:18 of the third when he deflected Doug Gilmour's shot while standing to the right of the crease.

Langkow then broke an 0-for-24 drought on the power play at 5:53 of the period to make it 3-1. Langkow picked up Mikael Renberg's pass deep in the Flyers' zone, skated in and beat goalie Jocelyn Thibault with a wrist shot.

The Flyers played without their two top centers. Eric Lindros was a late scratch because of back spasms in pregame warmups and Keith Primeau has missed five games since fracturing a rib against Buffalo on Feb. 12.

"Thankfully we are a deep team," said Philadelphia's Mark Recchi, who moved from his regular right wing slot to play center and picked up an assist on LeClair's goal. "We just have to weather the storm."