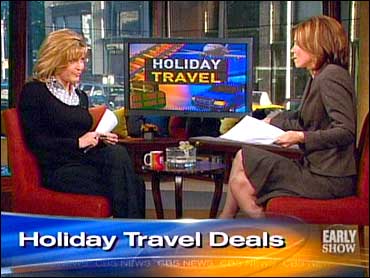 Thinking about traveling for the holidays? You may wish you'd bought your airline tickets earlier.

Travel agents say the average person books 85 days in advance, up from 81 last year, and there are only 24 days until Thanksgiving and 56 until Christmas this year.

Still, says AOL consumer adviser Regina Lewis, it's possible to save on holiday travel this year.

She told how on The Early Show Monday.

But if you didn't, there are still bargains to be had, if you're flexible.

Lewis explained that prices now are not only about supply and demand, but what's called dynamic pricing, in which airlines change prices on the fly, as they book seats. How many times have you been looking at flights and seen a price change in only seconds?

Aside from booking early, Lewis suggests knowing when in the week to book: Many airlines post discounts or new fares late Friday night or Saturday morning.

She says the way to go is to use a search engine such as Kayak, Travelocity, Orbitz, CheapTickets, Expedia, or TravelZoo. Find out what airlines are traveling to your city, which airport is a hub and has the most flights, and how much the flights are. Use the Web sites as your research tool. Learn what's out there.

First, consider the day you want to leave. If you want to book a flight home for Thanksgiving, going, say, from New York to Houston:

From Nov. 21-24 for a family of five, the total fare would b e $935 per person from Continental on a nonstop flight.

If all you do is push the return date back to Sunday, Nov. 25, for a family of five is $852 per person for a nonstop flight.

If you push the return date back to Monday, Nov. 26, the price drops to $502 per person on a nonstop Continental flight.

Leaving on Thanksgiving itself and returning Nov. 27 pushes the price down to $342 per person on Continental.

Leaving Thanksgiving Day and returning Sunday, Nov. 25, the price is $772. It appears returning on Sunday is the biggest price driver, so try to avoid it.

You also can save if you are flexible with your travel time, Lewis points out.

If you leave after work and school on Wednesday and come home later in the day on Saturday:

Also, if you have the travel time, consider traveling with stops over nonstop. Nonstop is pricier than everything else.

If you're still hesitant on booking the flight because you think maybe -- just maybe -- fares will go down, go to farecast.com. Last year, Lewis says, that was the site everyone had to go to before booking, because it predicts United States domestic price changes, enables users to book airline tickets online, and provides refunds if they get their predictions wrong!

Most of the major airlines have a guaranteed "airfare honor," Lewis adds. If the price falls, you're entitled to a refund. Some airlines charge you a "change fee," some don't.

Many people actually use travel search engines to find the flights that they're interested in but, when its time to book, do it at the airline sites, to avoid the booking fees at the travel sites, Lewis concludes.