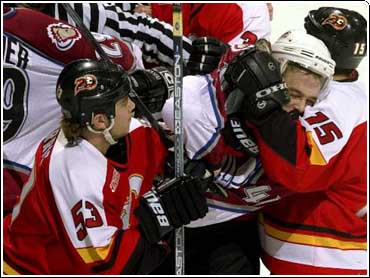 It took the Colorado Avalanche less than 14 minutes to erase more than two hours of futility.

Chris Drury scored on a rebound with 2:56 remaining to cap a third-period rally Thursday night as the Avalanche emerged from an offensive slump with a 3-2 victory over the Calgary Flames.

Sandis Ozolinsh and Milan Hejduk added goals for the Avalanche, who trailed 2-0 early in the third period before recovering to beat Calgary for the fourth time this season.

"It's a big deal," Drury said. "I think especially a team with this much talent going five periods (without scoring), we really needed a third period like that."

The Flames, coming off an overtime loss Wednesday night in Vancouver, remained winless (0-6-1) in their last seven games. Calgary's last victory was Jan. 24 against Boston.

"It's really tough. To have a 2-0 lead in the third like that, yeah, we do feel like we let them off the hook," Calgary forward Jarome Iginla said. "We did it to ourselves tonight."

Patrick Roy, who verbally challenged his team after practice Wednesday and again after the second period Thursday, made 30 saves for Colorado to win his 20th game of the season. He has reached the 20-victory mark 14 times in 15 seasons.

Calgary, 0-8-2 in the second half of back-to-back games, led 2-0 after Iginla beat Roy from just outside the crease 1:34 nto the third period.

Ozolinsh started Colorado's comeback when he scored from just inside the blue line on a power play at 6:31. The puck bounced off Jean-Sebastien Giguere's glove and trickled into the net.

"My defense came in front of me and I lost sight of the puck," said Giguere, who had 30 saves. "I saw it at the end, and got it with the end of my glove, but it bounced in back of me."

The misfortune snowballed from there as Hejduk tied it on a rebound on another power play at 12:46. The Avalanche had failed to convert 23 straight power plays before Ozolinsh and Hejduk broke through.

Calgary has given up 16 power-play goals in its last 10 games.

"We were fine except for the power plays they had," said Calgary coach Brian Sutter. "We'd done a heck of a job killing them until that point in time. But you can't kill that many. The odds are going to catch up with you."

Colorado trailed 1-0 after one period and failed to tie the game in the second despite having a man advantage for 3:47 after a double-minor penalty on Andrei Nazarov.

The Avalanche managed just two shots on the extended power play, and nearly gave up a short-handed goal to Iginla, who missed wide left on a breakaway attempt.

The Flames, outscored 19-5 by Colorado this season, killed four power plays and scored on their first shot to take a 1-0 lead at 8:19 of the first period.

Derek Morris provided the goal, his seventh of the season, scoring from the top of the right circle after taking a pass from Iginla that set up a 2-on-1 break.

Colorado played its third straight game without Peter Forsberg, who is recovering from a concussion. He is expected to return Sunday against Detroit.