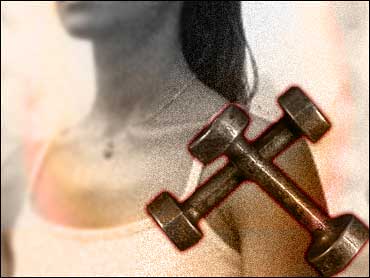 Short on time for exercise? Getting fitter may not put as much of a dent in your schedule as you think.

A new study shows that it may take as little as 72 minutes of moderate exercise per week to improve aerobic fitness.

That's nearly half the minimum amount of moderate exercise recommended by the CDC and other health organizations.

When it comes to exercise, the rule of thumb appears to be that "even a little is good; more may be better!" exclaims an editorial published with the new study in The Journal of the American Medical Association.

First, the women tested their aerobic fitness on a stationary bike, pedaling as hard as they could while cranking up the resistance on the bike.

Three of the four groups were assigned to get moderate-intensity exercise on a stationary bike or treadmill three or four times per week for six months.

For comparison, women in the fourth group weren't assigned to exercise.

Assigned workouts were done under expert supervision. That way, the researchers made sure that the women followed their exercise assignments.

The women also got up to $350 in financial incentives to stick with the study. They got less money if they missed a week of workouts. Most women saw the study through to the end.

At the end of the six-month study, the women repeated the fitness test. The results show that all of the exercise groups had boosted their aerobic fitness.

Those results take other factors into consideration, including age, BMI, race, and hormone therapy.

Blood pressure also didn't change during the study, except for a slight drop in blood pressure in the women who got the most exercise. Weight loss or more intense exercise might have been more beneficial to the women's blood pressure, Church's team notes.

It's no secret that exercise is good for you, provided that you get a doctor's approval first and stick to a sensible exercise plan to avoid injury.

"Nearly all individuals understand that there are health benefits associated with physical activity, yet approximately one in five U.S. adults report no physical activity at all," write Church and colleagues, adding that lack of time is the main reason people cite for not being more active.

The researchers aren't ready to recommend cutting public health recommendations to get at least 150 minutes of weekly exercise.

But they say their study should be considered when exercise recommendations are revised.

For instance, Lee notes that it's not clear if the women would have gotten similar fitness results from short exercise sessions held seeral times daily or by only exercising on weekends.

Still, Lee notes that people who aren't active should find the study's data "encouraging, because they indicate that an achievable dose of physical activity may be sufficient to begin reaping health benefits."

By Miranda Hitti
Reviewed by Louise Chang
B)2005-2006 WebMD, Inc. All rights reserved