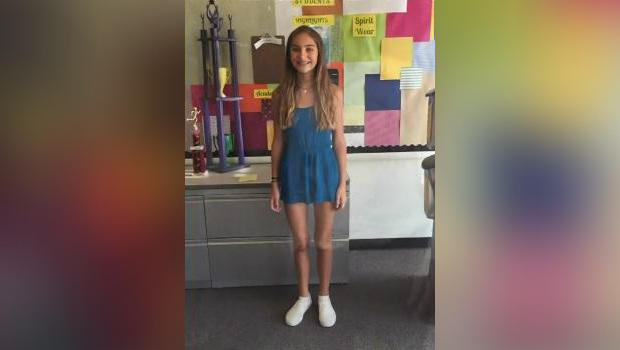 LOS GATOS, Calif. -- A middle school in California is considering making a change to its dress code in response to a man who stood up for his daughter after she was sent home because of her clothing.

CBS San Francisco reports Fisher Middle School officials told 13-year-old Demetra Alarcon her outfit -- a romper -- was distracting to boys. Alarcon's teacher insisted the garment was too short. Her father, however, argued that there's something bigger at stake.

"I mean, today it's 90 degrees outside and she's wearing leggings because she doesn't want to be dress-coded for wearing shorts," said Demetra's father, Tony. "And it's not OK. It needs to change."

"I brought her a change of clothing, which included a tank top with spaghetti straps and shorts," he added.

But school leaders weren't happy with that outfit either because the shorts didn't have a four-inch inseam.

"Fisher has a dress code policy, which is clothing specific. Most of the clothing mentioned are women's clothing like halter tops (and) spaghetti straps," said Alarcon.

He asked for input from neighbors on NextDoor.com, a private social media site for your neighborhood, to see if his argument against the current dress code made sense. He received dozens of messages of support.

One woman wrote: "Your post has reminded me of some fairly serious body image issues of my own that have stemmed from our cultural shaming and sexualizing of girls' bodies."

Alarcon doesn't want his daughter or any other young girl to have to go through that.

"You have to stand up for what's right and that's what I'm doing," he said.

While she may only be 13, the eighth grader could end up being the reason a major change in the dress code policy occurs.

Los Gatos Union School District Superintendent Diana G. Abbati did not want to speak on camera, but she did release a statement regarding the dress code that reads in part: "Students are expected to wear clothes that are suitable for the school activities in which they participate."

Abatti said that parents should learn the decision on the dress code in the near future.