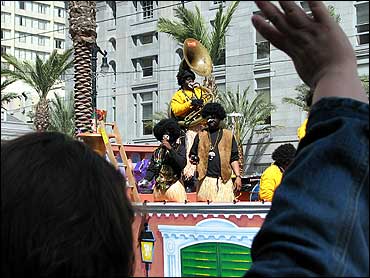 The Miami Dolphins agreed to a four-year extension with wide receiver O.J. McDuffie on Wednesday, keeping the receiver on the team through the 2004 season.

McDuffie's agent, Joel Segal, said the deal was for $20 million, an average of $5 million per year.

McDuffie had two years remaining on a contract that would have paid him $1.3 million this year. Segal threatened a holdout unless an agreement on a new deal was reached before McDuffie was scheduled to report for training camp Friday.

McDuffie said he was happy to get a deal done that will keep him a Dolphin.

"I've spent my entire career here and enjoy being a part of this team," he said.

Dolphins coach Jimmy Johnson said locking up McDuffie to a long-term deal was a reward for McDuffie's play and attitude. McDuffie led the NFL last season with 90 receptions.

"O.J. has been the consumate professional," Johnson said. "He's set an example for the team to follow. For the past two years he's been involved in our offseason program almost religiously. He's been a total team player. Some great players aren't professional, but that's not the case with O.J."

"I told O.J. that I want to see him retire as a Dolphin," Johnson said. "And this is the way to make that happen."

McDuffie's deal comes on the heels of Dan Marino's extension. The 37-year-old Marino signed a two-year extension in July to clear salary cap space for Miami.