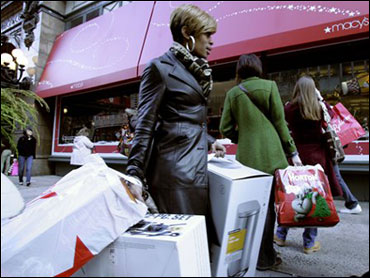 ShopperTrak, a retail research firm, predicted Tuesday that total holiday sales will rise 1.6 percent compared with a year ago, which would reverse last year's steep decline.

The research firm also expects a 4.2 percent decline in foot traffic compared to a year ago.

The holiday sales estimate is a bit rosier than other forecasts offered over the past few weeks, which have been at best no better than unchanged from last year's debacle. The holiday 2008 season saw the biggest sales decline in at least several decades.

The National Retail Federation, usually bullish about holiday sales, predicts a 1 percent decline in total sales to $437.6 billion for November and December combined.

"The consumer is just tired" of all the bad news, said Bill Martin, co-founder of ShopperTrak, based in Chicago. He added that shoppers have pulled back from buying sweaters and other purchases over the past year and are looking to refill their closets, though spending will be tempered.