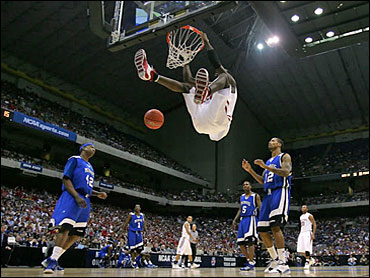 Cinderella may have been invited to the Big Dance, but never had a shot at reaching the main stage as the No. 1 and No. 2 seeds reigned at this year's NCAA Men's basketball tournament.

Defending champion and top-seeded Florida knocked off No. 3 Oregon 85-77 Sunday. Hours later, No. 2 Georgetown capped another second-half comeback by demolishing No. 1 North Carolina in overtime 96-84.

The Gators (33-5) next face No. 2 UCLA, a matchup of last year's title game, while the Hoyas (30-6) meet No. 1 Ohio State, whom they defeated in the second round of the tournament last season.

By far, the most thrilling story of the weekend was Georgetown's back-to-back comebacks from double-digit deficits that propelled them to the East Regional title and into the Final Four.

Down 11 points midway through the second half Sunday, the Hoyas chipped away at North Carolina's lead, aided in part by the Tarheels' ice cold shooting. Georgetown eventually tied the score at 81-81 with 31 seconds left on Jonathan Wallace's 3-pointer.

North Carolina's Wayne Ellington's jumper missed as time expired, sending the game into overtime where the Tarheels (31-7) fell apart, making only one field goal in the final five minutes.

Georgetown, coached by John Thompson III and featuring Patrick Ewing Jr., lost to North Carolina in the 1982 championship game, when both men's fathers were coach and player, respectively.

"The comparisons to Pop's teams, much like the talk about Big Pat, Little Pat, Big John, Little John, you guys can do that," Little John said.

"For us to figure out how to hold on and pull away with a win,
against that team is special."

Jeff Green, who hit a game-winning shot with 2.2 seconds left Friday to lift Georgetown over Vanderbilt, led the Hoyas with 22 points with teammate DaJuan Summers adding 20.

The Gators are two wins from being the first team to win consecutive national championships since Duke accomplished the feat in 1991-92. Florida, however, would be the first team ever to win twice in a row with the same five starters.

"There's been such a circus around this team, so many distractions and I feel like everybody is trying to divide us," Noah, the 2006 Final Four Most Valuable Player, said after Florida won the Midwest Regional final Sunday.

"It's just making us bond. We realize all we have is each other. That's the only thing that really matters," he said.

Oregon (29-8) came within four points with 17 seconds left, but Green hit 3 of 4 from the foul line to seal the Gators' win, their 16th straight postseason victory dating back to last season.

Both men's semifinal games are Saturday night in Atlanta.