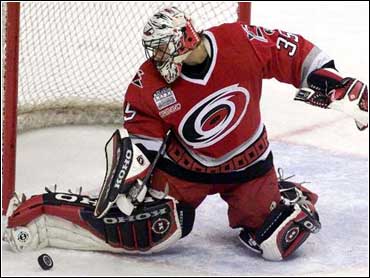 Backup goaltender Eric Fichaud, who played in only nine of 55 games this season for the Carolina Hurricanes, was claimed off waivers by Montreal on Friday.

Fichaud, 24, had a 3-5-1 record with a 2.94 goals against average this year after being acquired in the offseason from Nashville.

"I have been traded before but never been picked up on waivers, so I'm in shock," Fichaud said after his final practice with the Hurricanes.

"It's sad to leave. We have a very close team and I have very good friends here. But at the same time, I'm from the Montreal area and I've always dreamed of playing for the Canadiens."

Mark Fitzpatrick was recalled from the Cincinnati Cyclones of the IHL to fill Fichaud's roster spot, the team said. The 11-year goalie will join Carolina prior to the team's Saturday road game against the Tampa Bay Lightning.

He spent last season with Chicago, playing in 27 games and registering a 6-8-6 record with a 2.74 goals against average.