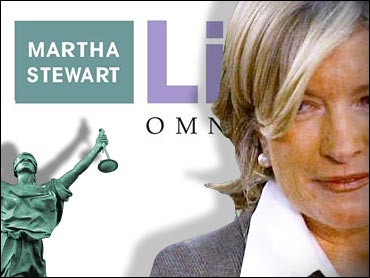 Martha Stewart's company said Tuesday the home-decorating mogul has been warned that federal prosecutors plan to seek an indictment against her soon in the insider-trading scandal that has been hanging over her head for the past year.

Her lawyer said she would fight any charges.

Stewart, who built her fortune as a symbol of gracious living and impeccable taste, has been under investigation for selling 4,000 shares of the biotechnology company ImClone Systems in December 2001, just before the stock plunged on disappointing news about a Food and Drug Administration decision on an ImClone cancer drug.

Investigators want to know if Stewart had inside knowledge of the impending FDA decision. She is friends with ImClone founder Samuel Waksal.

Her media company, Martha Stewart Living Omnimedia, said Tuesday that her attorneys have told the company that federal prosecutors in New York intend to ask a grand jury for an indictment "in the near future."

A source familiar with the case tells CBS News an indictment against Stewart could come as soon as the end of the week, reports Correspondent Jim Acosta.

Analysts have speculated Stewart could be charged with insider trading or obstruction of justice.

The company also said that federal securities regulators, who previously notified Stewart they intend to bring civil charges against her, will probably file their complaint soon.

Representatives of both U.S. Attorney James Comey and the Securities and Exchange Commission declined to comment.

Stewart, 61, has denied any wrongdoing. She says she had an arrangement with her broker to automatically sell the stock if it dropped to a certain price.

Stewart's chief attorney, Robert Morvillo, said Tuesday that if she is indicted, "she intends to declare her innocence and proceed to trial."

Stewart did not attend her company's annual shareholders meeting, which was held Tuesday in Manhattan and closed to the press. In a brief video, she apologized for not attending but did not address the investigation.

Martha Stewart Living Omnimedia stock fell sharply on the news, dropping $1.68 — or 15 percent — to close at $9.52 on the New York Stock Exchange.

The stock has plunged from just over $19 in June 2002 since news broke of her sale of ImClone stock. It hit a low of $5.26 in October, when she resigned from the NYSE board of directors and an assistant to her stockbroker agreed to cooperate with prosecutors.

Stewart is the company's chairman and chief executive. She has her own TV show, makes appearances on other programs, and has her own line of household items. She told The New Yorker magazine in January she had lost about $400 million because of the company's declining value, legal fees and lost business opportunities.

Waksal will be sentenced next week after pleading guilty to six counts in the insider-trading scandal. He could get to six to seven years in prison, plus fines.

Waksal has not implicated Stewart, though he has admitted he tipped off his daughter, Aliza, to sell her ImClone stock before it plummeted.

Stewart's sale of ImClone stock came one day before the FDA said it would not review ImClone's application for approval of Erbitux, which the company had touted as a promising cancer drug.

Just this week, a new study was released concluding that Erbitux was effective against cancer after all. ImClone stock rose sharply.