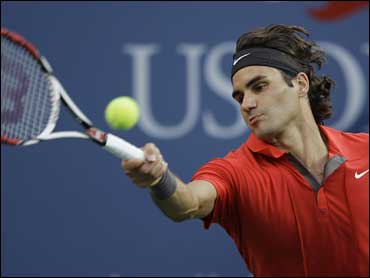 Back at his best, back at the top of tennis, Roger Federer easily beat Andy Murray 6-2, 7-5, 6-2 to win his fifth consecutive U.S. Open and 13th Grand Slam title on Monday.

Federer is the first man since Bill Tilden in the 1920s to win the tournament that many times in a row. He also moved within one major championship of tying Pete Sampras' career record of 14.

The victory might have come as a bit of a relief to Federer, who has struggled during a lackluster-only-for-him season. He lost in the semifinals at the Australian Open, and to nemesis Rafael Nadal in the finals of the French Open and Wimbledon, meaning Federer was on the verge of his first year since 2002 without a major title.

But Murray upset Nadal in the semifinals at Flushing Meadows to reach his first Grand Slam final, and Federer had no trouble this time.

"I'm not as nervous anymore, like in my first final," Federer said during a prematch TV interview.

Perhaps he was trying to plant a seed of doubt in Murray's head. The youngster from Scotland was standing around the corner, waiting to walk out onto the court, probably already thinking about what it would feel like to be on that stage, with those stakes, against that opponent.

With his bushy hair peeking out from under his gray-and-white baseball cap, unshaven whiskers, and that loping gait, the 21-year-old Murray looks much like the college student he otherwise might be if not so talented at tennis.

Federer, coincidentally, was the same age when he played in his first Grand Slam final, back in 2003 at Wimbledon. Except Federer won that, and has kept winning major championships against everyone except Nadal.

On Monday, Murray stood about 10 feet (3 meters) behind the baseline to return serves, exactly the way he did in upsetting Nadal in their two-day, rain-interrupted semifinal over the weekend. And Murray did display flashes of the get-to-every-ball defense he used against Nadal, including one pretty flick of a lob by Federer with his back to the net.

But Federer, who might have benefited from an extra day to rest because his semifinal wasn't affected by Tropical Storm Hanna, was simply too much for Murray.

At only one juncture did Murray really throw a scare into his opponent on this day, taking 11 of 12 points to go from 2-0 down in the second set to 2-all and love-40 on Federer's serve.

Federer saved the first of those break points, and on the second, they engaged in a 14-stroke rally that ended with Murray missing a backhand. TV replays, though, showed one of Federer's shots during the rally should have been called out — and had it been, Murray would have had a break and a 3-2 lead in the set.

But there was no call, and no reprieve, because Federer stayed steady enough to save the third break point there and go on to hold serve.

In the next game, Murray began flexing his right leg, clutching at that knee and looking up at his substantial support group in the guest box, a gathering that included his mother, his two coaches and his two fitness trainers.

Federer went on to break Murray at love in the last game of the second set, closing it on a 10-stroke point that was a thing of beauty. First, Federer extended the point with some superb defense, and then he ended it with a forehand passing winner.

Federer turned to his guest box and bellowed, punching down with his right fist.

This is how he is supposed to play.

This is how these Grand Slam finals are supposed to go.

Federer then won nine of the first 10 points in the third set, including a break at love, en route to a 5-0 lead.

Only when Federer served for the match, at 5-1 in the third, did he show a modicum of mediocrity, getting broken when he dumped a backhand into the net.

It merely delayed the inevitable.

Federer broke right back in the next game when Murray put a forehand into the net. Federer dropped his racket and fell to the blue court and rolled around with glee.