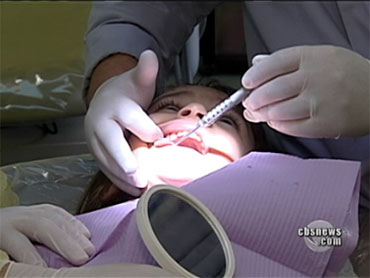 Many people have silver fillings in their teeth called amalgams. Dentists put in more than 50 million of them annually.

The Food and Drug Administration looked Tuesday at whether they may be hazardous, CBS News Medical Correspondent Dr. Jon LaPook reports.

Ross Prevett, 46, suffered for years from fatigue and sinus congestion and said nothing gave him relief until his dentist removed his silver fillings.

"I wouldn't have believed it would have caused a difference," said Prevett. "It's absolutely amazing."

Amalgam is half silver and other metals and half mercury. It's more durable and cheaper than composite, a mixture of plastic and glass.

Others who claim amalgam made them sick spoke out Tuesday at a FDA panel re-examining the safety of mercury fillings.

"I was vomiting every day for months," one person said.

"My child now has 59 seizures a day," another said.

In 2008, the FDA suggested pregnant women and children avoid amalgam, but one year later the FDA said there was no proof amalgam was dangerous.

Since then, consumer groups have filed four petitions challenging the government's position.

Mercury in dental fillings is released in small amounts as vapor that can potentially be inhaled, enter the bloodstream and travel to other parts of the body. Mercury toxicity from other sources can cause kidney and brain damage.

"I have amalgams in my own mouth, and my children have them, my wife, and we're convinced there are no adverse health effects," the association's Dr. J. Rodney Mackert said.

Dentists such as Dr Mark Breiner are unconvinced.

"You must handle mercury as a hazardous material," said Breiner. "Why would it be safe in the mouth? It makes no sense, defies all logic."

On Wednesday, the panel could recommend that the FDA reconsider its position or conclude that so far there just isn't enough evidence amalgams can cause harm.

In the meantime, no major medical organization is recommending people get amalgams removed. Patients who do decide to do this should know health insurance is unlikely to pay for it, and the cost could run into thousands of dollars.